– Oppose Fascism of the Right and the Left:

Following the recent clashes between the alt-right and the group antifa, some libertarians have debated which group they should support. The answer is simple: neither. The alt-right and its leftist opponents are two sides of the same authoritarian coin. 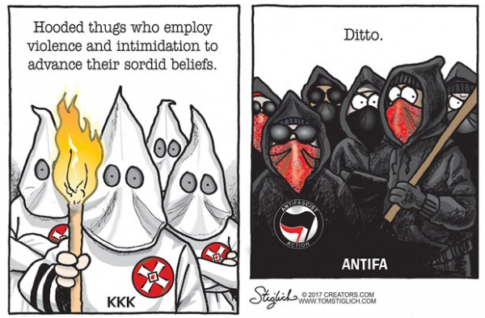 The alt-right elevates racial identity over individual identity. The obsession with race leads them to support massive government interference in the economy in order to benefit members of the favored race. They also favor massive welfare and entitlement spending, as long as it functions as a racial spoils system. Some prominent alt-right leaders even support abortion as a way of limiting the minority population. No one who sincerely supports individual liberty, property rights, or the right to life can have any sympathy for this type of racial collectivism.

Antifa, like all Marxists, elevates class identity over individual identity. Antifa supporters believe government must run the economy because otherwise workers will be exploited by greedy capitalists. This faith in central planning ignores economic reality, as well as the reality that in a free market employers and workers voluntarily work together for their mutual benefit. It is only when government intervenes in the economy that crony capitalists have the opportunity to exploit workers, consumers, and taxpayers. Sadly, many on the left confuse the results of the “mixed economy” with free markets.

Ironically, the failure of the Keynesian model of economic authoritarianism, promoted by establishment economists like Paul Krugman, is responsible for the rise of the alt-right and antifa. Despite a recent (and likely short-lived) upturn in some sectors of the economy, many Americans continue to struggle with unemployment and a Federal Reserve-caused eroding standard of living. History shows that economic hardship causes many to follow demagogues offering easy solutions and convenient scapegoats.

Left-wing demagogues scapegoat businesses and the “one percent,” ignoring the distinction between those who made their fortunes serving consumers and those who enriched themselves by manipulating the political process.

Right-wing demagogues scapegoat immigrants and minorities, ignoring how these groups suffer under the current system and how they are disproportionally impacted by policies like the war on drugs and police militarization.

As the Keynesian-Krugman empire of big government and fiat currency collapses, more people will be attracted to authoritarianism, leading to an increase in violence. The only way to ensure the current system is not replaced with something even worse is for those of us who know the truth to work harder to spread the ideas of liberty.

While we should be willing to form coalitions with individuals of good will across the political spectrum, we must never align with anyone promoting violence as a solution to social and economic problems. We must also oppose any attempts to use the violence committed by extremists as a justification for expanding the police state or infringing on free speech. Laws against hate speech set a dangerous precedent for censorship of speech unpopular with the ruling elite and the deep state.

Libertarians have several advantages in the ideological battle over what we will replace the Keynesian welfare model with. First, we do not need to resort to scapegoating and demagoguing, as we have the truth about the welfare-warfare state and the Federal Reserve on our side. We also offer a realistic way to restore prosperity. But our greatest advantage is that, while authoritarianism divides people by race, class, religion, or other differences, the cause of liberty unites all who seek peace and prosperity.