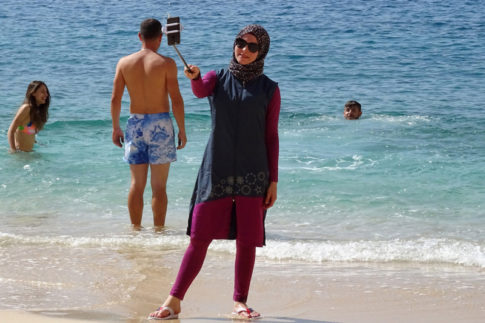 A woman who wore a burkini to swim in a pool in southern France has been charged €490 ($580) to pay for cleaning costs at the facility. The incident, which sparked accusations of Islamophobia, is the latest salvo in an ongoing debate over Islamic dress codes in France and other secular European states.

Those in favor of the burkini argue that women should be allowed to wear whatever they choose. Critics of the garment say it is a religious and political symbol which impedes integration and is incompatible with the liberal principles of secularism and gender equality. In recent months, the debate has added another dimension: public health and hygiene.

The woman was vacationing with her family at a bed and breakfast near Marseille when the owner spotted her in the swimming pool wearing a full-body swimsuit, according to the Collective Against Islamophobia in France (CCIF). He subsequently had the pool emptied and cleaned and charged the family for the costs and compensation for the days the pool was out of service. When they refused to pay, the owner allegedly charged them anyway.

The woman reported the incident to the CCIF, which said the burkini could not have caused a hygiene issue as the swimsuits are specifically adapted for swimming. “I was disappointed, shocked, wounded by the fact that someone could be so hypocritical and wicked because of a burkini,” the woman said.

Elsewhere in France, the mayor of Lorette, Gerard Tardy, banned burkinis and other Muslim clothing at a new outdoor swim park, also for reasons of public health:

“Monokinis, burkinis, partial veils or veils which totally conceal the face, or a combination thereof, are prohibited on the beach. Any breach of this provision will lead to the immediate expulsion (which may cover the entire swimming season) of the offenders by security or, if necessary, by the police.”

Aldo Oumouden, spokesman of a mosque in Saint Étienne, responded:

“France is multicultural and banning the veil at this facility is an attack on the individual freedom of Muslims and does not even distinguish between burkini and headscarf. How is it that the veil is aggressive or dangerous for the population? It does not represent any health problem, and there is no interference with the freedom of others. Does Mayor Tardy not realize that this decision will further stigmatize Muslims? It is not only unnecessary but also devastating for community harmony.”

In July, an appeals court in Marseille validated the ban on burkinis in Sisco, a town in Corsica, in the interests of maintaining public order. Mayor Ange-Pierre Vivoni argued the ban was necessary to avoid a repeat of fighting between local youths and Muslims in August 2016, when five people were hurt. Muslims went on a rampage after a tourist took a photograph of several burkini-clad women swimming in a creek. More than 400 people eventually joined the brawl, in which local Corsicans clashed with migrants from North Africa. The following day, more than 500 Corsicans marched through the town shouting “To arms! This is our home!”

In May, a dozen Muslim women were arrested for holding a pro-burkini protest during the Cannes International Film Festival in Cannes. The women were wearing red, white and blue burkinis along the town’s famous promenade. Police said the women did not have a permit to protest.

In March, the frontrunners in the French presidential election clashed over the burkini in a television debate. Marine Le Pen accused Emmanuel Macron of “defending the burkini.” Macron accused Le Pen of “dividing society.” According to Le Pen, the burkini is a “fundamentalist uniform.”

This year’s controversies harken back to the summer of 2016, when more than 30 cities and towns on the French Riviera banned burkinis from local beaches. In August 2016, the Council of State, France’s highest administrative court, ruled that the bans — which were issued after the July 2016 jihadist attack in Nice — were a “serious and manifestly illegal attack on fundamental freedoms, including the freedom of movement and the freedom of conscience.” The judges ruled that local authorities could only restrict individual liberties if there was a “demonstrated risk” to public order. There was, they said, no evidence of such a risk.

Patrice Spinosi, a lawyer for the Human Rights League (LDH), said that in the absence of a demonstrated threat to public order, the high court “has ruled and has shown that mayors do not have the right to set limits on wearing religious signs in public spaces. It is contrary to the freedom of religion, which is a fundamental freedom.”

“Secularism and religion are irrelevant here. The burkini is not a Koranic prescription, but another manifestation of political Islam, militant, destructive, seeking to question our way of life, our culture, our civilization. Veils in schools, street prayers, halal school menus, sexual apartheid in swimming pools, hospitals, driving schools, niqab, burqa… for thirty years this infiltration has been undermining our society, seeking to destabilize. It’s time to slam the door in its face.”

Opinion polls show broad public support for bans on burkinis. According to an Ifop poll published by Le Figaro in August 2016, 64% of people in France are opposed to the burkini on beaches; only 6% support it. Ifop director Jérôme Fourquet said:

“The results are similar to those we measured in April about the veil and headscarf on public streets (63% opposed). Beaches are equated with streets, where the wearing of ostentatious religious symbols are also rejected by two-thirds of the French.”

The debate over burkinis is not limited to France.

In Portugal, two British tourists said they were “humiliated” after being told to leave a communal swimming pool in Albufeira, a popular holiday destination, because they were wearing burkinis. A member of the hotel staff reportedly told the women to abide by Portuguese norms or leave.

In Italy, a Moroccan family caused a stir at a public swimming pool in Montegrotto. Not only were the women wearing burkinis, but the men jumped into the pool wearing street clothes. Photos of the incident went viral after being posted on social media. At a public pool in Pontedera, a Muslim woman was observed swimming, not in a burkini but in a burka. The pool mangers said: “All people of every religion, culture and school of thought are welcome in this facility provided that they observe hygienic and sanitary norms.” Elsewhere, a Muslim woman caused a polemic by wearing a burkini at a municipal pool in Ferrara.

In Austria, the Neuwaldegger Bad, a private outdoor swimming pool in Vienna, announced a burkini ban: “Only swimwear which is customary for us, bathing suits and bikinis, are permitted.” The burkini has also been banned at the Wachaubad in Melk, Lower Austria. A water park in rural Kirchberg requires patrons to wear “local bathing clothing.” Mayor Anton Gonaus said this rule has been in place for 25 years and that there have been no problems because up to now there have been no burkini wearers. “This puts Muslim women in a corner and tells them that they do not belong,” complained Carla Amina Baghajati, the women’s commissioner of the Islamic Community in Austria (IGGiÖ).

In July, a Muslim journalist named Menerva Hammad went to a public swimming pool in Vienna in a burkini to gauge reactions. She was confronted by an Austrian woman who said: “This is unhygienic. This is not Turkey.” The pool manager sided with Hammad and asked the Austrian woman to leave the premises. Hammad says she has received hate mail from across Austria by people accusing her of setting off a burkini trend at pools across the country.

Europe’s burkini debate has now spread to the Middle East. In Algeria, thousands of women have joined a “bikini revolt” to reclaim the public space from Islamists who oppose the bikini as a symbol of Western values.

In Morocco, where burkinis are banned at many tourism hotspots, the government in January outlawed the sale and production of burkas, evidently in a bid to crack down on Islamic extremism.

In Lebanon, a woman wearing a burkini was escorted off the beach at a luxury resort in Tripoli; the action was apparently taken to discourage the trend from spreading and harming tourism.

In Egypt, the Ministry of Tourism issued an order requiring hotels and resorts to welcome women wearing the burkini. The government backtracked after hoteliers complained about the potential impact on tourism; hotels and resorts may now decide for themselves whether or not to allow women to wear burkinis.

In Saudi Arabia, Crown Prince Mohammed bin Salman has announced plans for a Red Sea beach resort where the law will be changed to allow women to wear bikinis. The project is part of a plan to transform part of the Saudi coastline into a beach resort for the international market. Some observers say the plan is unlikely to succeed.