You’ll find my commentary down below.

In a move that is certain to prompt more allegations that Wikileaks is part of a counter-establishment push, one ostensibly supported by Russia, on Monday morning Wikileaks dumped more than 21,000 “verified” emails associated with the French presidential campaign of Emmanuel Macron. Julian Assange’s organisation claims the batch of  21,075 emails, dating from March 2009 to April 2017, have been uniquely verified through its DKIM system.

As a reminder, in the days before the May 7 French presidential election, Macron’s campaign confirmed it was hit with a “massive, coordinated” hack which released 9 gigabytes of personal documents. 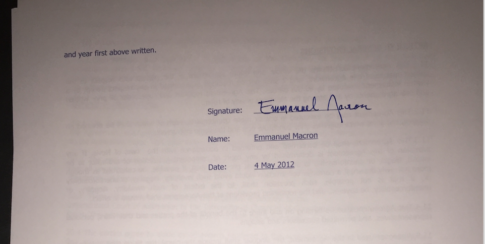 The French electoral commission immediately prohibited the French media from publishing the contents of the leak, and while speculation quickly emerged that Russia was involved in this hacking, France later confirmed there were “no traces of Russian hackers in the Macron cyber attack.”  The head of the French government’s cyber security agency, Guillaume Poupard, told AP  the hack was “so generic and simple that it could have been practically anyone.”

Ironically, less than two months later, with Macron’s approval rating suddenly in freefall, the Russian hacking story re-emrged, when Reuters reported that Russia tried to use an “elaborate Facebook hacking scheme” on the French presidential campaign. It is unclear if the French population will shift their anger away from Macron and to the default scapefoat Russia, helping Macron’s sudden slide in popularity.

To be sure, the Macron hacking story is about to get its second wind when according to Wikileaks statement, there is now a full archive of 71,848 emails with 26,506 attachments from 4,493 unique senders is provided for context. Wikileaks stated that while only the 21,075 emails marked with its green “DKIM verified” banner are certified by WikiLeaks as genuine, it believes “based on statistical sampling” that the “overwhelming majority” of the remainder are also authentic.

“As the emails are often in chains and include portions of each other, it is usually possible to confirm the integrity [of] other emails in the chain as a result of the DKIM verified emails within it,” the statement reads.

Curiously, unlike in the US, the initial May hack did not have an adverse impact on Macron’s presidential chances – unlike in the US, where Hillary Clinton has repeatedly blamed “Russian interference” as the main reason for her loss – when the youngest ever French president defeated his opponent Marine Le Pen in a landslide. Should he have lost, the outcome would likely have been different.

If Wikileaks is an intelligence operation, then the country behind it is Israel and not Russia, with Israel being just another Rothschild puppet outpost (that will be sacrificed during WW3).

Related info (Be careful about Wikileaks!!!):

Also “forget” about the “Greater Israel Project“, the whole of Palestine (incl. Israel) will be made level with the ground during WW3.

So what is this Wikileaks release all about if Macron clearly is another Rothschild puppet himself???

It is all about dividing the people before the coming financial/economic collapse & hyperinflation, which will cause the greatest revolution of all time in the US and civil war in all of Europe.

And all of Europe will have to fight many of those migrants, which is why Rothschild puppet Soros invested $500 million to bring more of them to Europe.

Soros is not wrong, just evil.

Those migrants are not just to be seen as replacement, see the Coudenhove-Kalergi plan for Europe and the U.N. document from the year 2000.

All of this will be directly followed by well in advance planned WW3.

“Everything calls peace, Schalom! Then it will occur – a new Middle East war suddenly flames up, big naval forces are facing hostiley in the Mediterranean – the situation is strained. But the actual firing spark is set on fire in the Balkan: I see a “large one” falling, a bloody dagger lies beside him – then impact is on impact.

Alois Irlmaier: “It will start with the Jews and the Arabs. There it will begin”….

Most of them foresaw these events many years ago, when there hasn’t been an internet around.