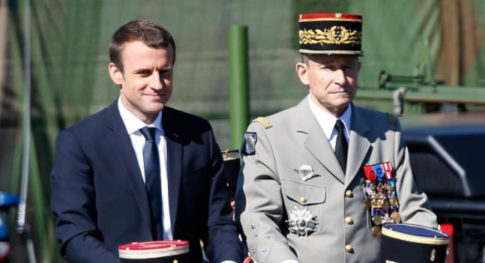 – “I Won’t Let Myself Be F***ed”: French Armed Forces Chief Resigns After Clashing With Macron:

France’s armed forces chief resigned on Wednesday, culminating a dramatic dispute with president Emmanuel Macron over defense budget cuts, in what Reuters called “an early test of the newly elected president’s mettle and the tough presidential style he is cultivating.” Last week, General Pierre de Villiers publicly lashed out about Macron’s proposed €850 million cuts to the military’s budget, when in an outburst before a parliament committee he said he “won’t let myself be fucked like that,” adding that “I may be stupid, but I know when I am being had.”

In a statement released on Wednesday, the 60-year-old De Villers said that “in the current circumstances I see myself as no longer able to guarantee the robust defense force I believe is necessary to guarantee the protection of France and the French people, today and tomorrow, and to sustain the aims of our country,” noting he had tried to keep the armed forces fit for an ever more difficult task within the financial constraints imposed on it, but was no longer able to sustain that. He added that Macron had accepted his resignation.

The open conflict between the head of state and the chief of armed forces started earlier in July when France’s Budget Minister Gerald Darmanin announced military budget cuts.  According to the proposed budget the Defense Ministry would have to make savings of just under $980 billion. The Interior and Foreign Ministries also had to face budget cuts. Darmanin told Le Parisien that the authorities “have found €4.5 billion in savings… solely in the national government” and promised that neither social security nor local authorities “will come into it.”

In a surprisingly abrupt public response to De Villers’ initial outburst, Macron said “I have made commitments, I am your boss,” he said in a speech to dozens of top army officers and their families.

“If the [Armed Forces] chief of staff has an issue with the President of the Republic, the chief of staff will be changed,” Macron added in an interview to Journal du Dimanche newspaper.

“Armies basically obey. So in substance the president was within his rights to restate his authority… But the way he did it will leave marks. You cannot publicly question a military leader like that in front of his subordinates,” former chief of the French armed forces Henri Bentégeat told Le Monde newspaper.  “When Macron attends the first ceremony for a soldier killed because of a lack of equipment, all the criticism will be directed at him.”

On Wednesday, Macron moved quickly to replace de Villiers, appointing General Francois Lecointre, 55, to fill the role, a military source said. Macron also told ministers at a weekly cabinet meeting that he was still aiming to raise the defense budget to 2% of gross domestic product by 2025 despite cutbacks in 2017.

The departure of France’s most senior soldier also highlighted the stresses of a major military power as it battles Islamist insurgencies in Africa, partners with allies in Middle East conflicts, and patrols the streets at home in response to a series of jihadist attacks on French soil.