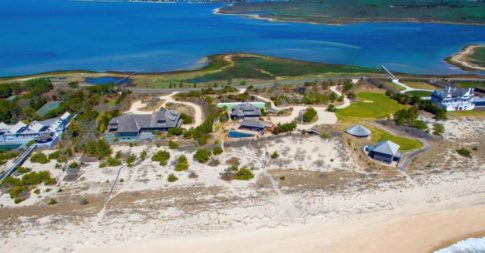 Real-estate prices in the Hamptons – the preferred North American summer retreat for wealthy finance types – have long been viewed as a barometer of the general mood on Wall Street. And with US stocks continuing their ascent to fresh record highs, despite Brainard’s admission that “asset valuations do look a bit stretched” and signs that the rally is being propelled by a concentration of megacap stocks, luxury real-estate agents out east are clearly praying for a blockbuster season after last year’s disaster.

Indeed, even as luxury apartment buildings along New York City’s billionaires row struggle with unsustainably high vacancy rates, stoking speculation of a bubble in the ultra-high end of the city’s real-estate market, the owners of a roughly 14-acre beachfront property with multiple houses and two putting greens in Southampton have the temerity to list the parcel for $150 million, making it the most expensive home for sale in the Hamptons right now.

However, the chances of finding a buyer willing to stomach the sticker price despite the generous size of the property – which was initially purchased as four separate parcels of land – are slim, because, as we reported earlier this year, despite the frothy US equity market, the Hamptons real-estate market is in full-on crash mode, with average prices down 29.7% YoY in 4Q16 and volumes down 14.5%.

Meanwhile, the “luxury” market in the Hamptons, which apparently includes homes with an average price tag of ~$7 million, is faring even worse with prices down 42.6% YoY and volumes down 14.5%.

As Jonathan Miller of Douglas Elliman told the WSJ early this year, he doesn’t expect the carnage in the Hamptons to slow anytime soon as he says there is still ““too much overpriced inventory – and it is rising.”
Here are some more details on the Southampton property, courtesy of WSJ:

On Meadow Lane in Southampton, the property is an assemblage of four parcels and includes several houses, according to listing agent Harald Grant of Sotheby’s International Realty. He declined to name the sellers or specify why they are selling, but said they purchased the parcels over the past few years with the intention of demolishing the existing homes to build a new family compound.

The combined properties offer about 700 feet of direct frontage on the ocean, Mr. Grant said. One of them, on 3.5 acres, includes a roughly 12,000-square-foot house, built in the 1990s, with eight bedrooms and an indoor pool.

Another parcel, on 3 acres, has two shingle-style houses: one measuring about 2,000 square feet with an outdoor swimming pool, and a roughly 3,000-square-foot home with a tennis court.

A third, 5-acre parcel has two putting greens built by a prior owner for practicing golf, plus two “golf cottages” overlooking the ocean.

A fourth parcel is a roughly 2.5-acre vacant lot with frontage on Shinnecock Bay, ensuring the property has views of both the ocean and the bay, Mr. Grant said.

According to WSJ, the sellers have been unwilling to reveal their identities. But whomever buys the property (probably at a steep discount to the sticker price once they’ve finished negotiating) “will almost certainly demolish the homes and start over.”

“’As we find in most instances at this price point, people want to hire their own architects and designers and build their dream home,’ Mr. Grant said. ‘You’re not going to spend this kind of money and live in someone else’s house.’”

Based on public records, the current sellers bought the properties from entertainment mogul Robert F.X. Sillerman in various transactions in recent years, paying about $114 million in total. Mr. Sillerman’s dance-festival conglomerate, formerly known as SFX Entertainment, filed for bankruptcy in 2016. Beachfront property in the Hamptons is among the most expensive real estate in the country, according to WSJ. Mr. Grant noted that another one of his oceanfront Southampton listings, “La Dune” on Gin Lane, is asking $145 million. While that property is only about 4 acres, its two homes are move-in ready.

With the number of millionaires and billionaires living in the US growing at an unprecedented pace – at least on paper – we’re curious to see what the final selling price will be. After all, with that much beachside property bundled together, the final buyer has an opportunity to build a home that could actually make them feel like they’re part of the ocean. And that’s an experience that can’t be quantified in terms of dollars or even, if the buyer ends up being some Chinese oligarch, bitcoin.