The European Union has initiated legal action against the Czech Republic, Hungary and Poland for failing to comply with a controversial order to take in thousands of migrants from Africa, Asia and the Middle East.

The so-called infringement procedure, which authorizes the European Commission, the powerful executive arm of the European Union, to sue member states that are considered to be in breach of their obligations under EU law, could lead to massive financial penalties.

The dispute dates back to September 2015, when, at the height of Europe’s migration crisis, EU member states narrowly voted to relocate 120,000 “refugees” from Italy and Greece to other parts of the bloc. This number was in addition to a July 2015 plan to redistribute 40,000 migrants from Italy and Greece.

Of the 160,000 migrants to be “shared,” nine countries in Central and Eastern Europe were ordered to take in around 15,000 migrants. Although the Czech Republic, Hungary, Romania and Slovakia voted against the agreement, they were still required to comply.

Many so-called asylum seekers have refused to relocate to Central and Eastern Europe because the financial benefits there are not as generous as in France, Germany or Scandinavia. In addition, hundreds of migrants who have been relocated to Estonia, Latvia and Lithuania, which rank among the poorest countries in the EU, have since fled to Germany and other wealthier countries in the bloc.

Meanwhile, the enforcers of European “unity” have sought to shame the Central European holdouts into compliance by appealing to nebulous concepts such as European “values” and “solidarity.” French President Emmanuel Macron, for example, recently warned:

“European countries that do not respect the rules should pay the full political consequences. There is a double betrayal. They decide to abandon EU principles, turn their back on Europe and have a cynical approach to the union which gives them money, without respecting its values.”

Leaders in Central and Eastern Europe have held their ground. In Poland, Prime Minister Beata Szyd?o said her country would not be blackmailed by European Union officials. In a speech to Parliament on May 24, two days after the jihadist attack in Manchester, England, in which a Polish couple was killed, she said:

“We are not going to take part in the madness of the Brussels elite…. Rise from your knees and from your lethargy or you will be crying over your children every day.

“If you cannot see this — if you cannot see that terrorism currently has the potential to hurt every country in Europe, and you think that Poland should not defend itself — you are going hand in hand with those who point this weapon against Europe, against all of us.

“It needs to be said clearly and directly: This is an attack on Europe, on our culture, on our traditions. Do we want strong politicians who can see the danger and can fight against it efficiently?” 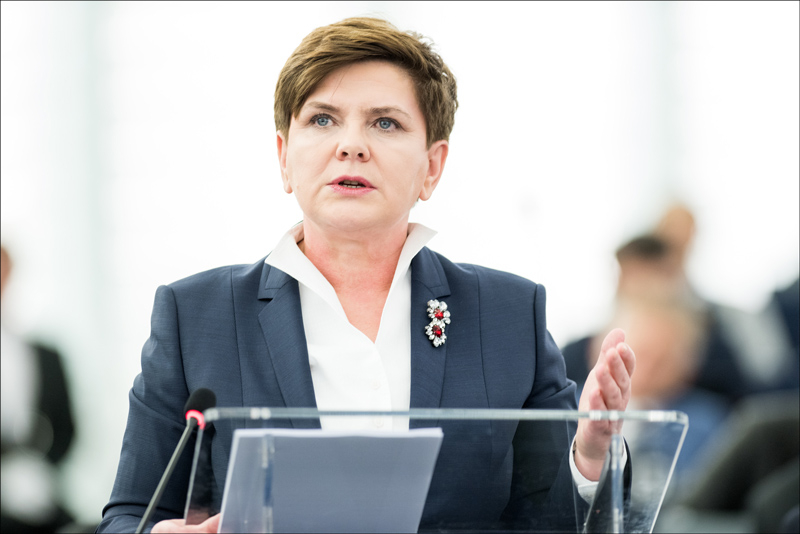 In a May 24 speech, Polish Prime Minister Beata Szyd?o said her country would not be blackmailed by European Union officials: “We are not going to take part in the madness of the Brussels elite… This is an attack on Europe, on our culture, on our traditions.” (Illustrative image source: European Parliament/Flickr)

Polish Interior Minister Mariusz B?aszczak said that agreeing to European Union quotas would “certainly be worse” than any punishment meted out by Brussels:

“We must not forget the terror attacks that have taken place in Western Europe, and how — in the bigger EU countries — these are unfortunately now a fact of life. Remember, that the now very numerous Muslim communities in Western Europe started out as relatively small numbers….

“I tell my counterparts in Western Europe that the relocation strategy only intensifies illegal migration because traffickers get even more customers when would-be migrants hear that people delivered to Europe are being given refuge in EU nations other than Italy and Greece.”

“Poland makes a contribution to the EU…. We are doing what the bloc says, what the treaties say. If the French president was thinking of refugees, well that issue is not mentioned in the treaties and when we joined the European Union we were not taking on that commitment.”

Poland’s European Affairs Minister Konrad Szyma?ski added: “There is no conflict on values between the Commission and Poland — it is about how to interpret these values.”

In the Czech Republic, Prime Minister Bohuslav Sobotka said that “given the deteriorating security situation in Europe and the non-functioning of the quota system, the Czech government will not participate in it.” He added: “We are ready to defend our position in the EU and the relevant judicial institutions.”

Czech Minister of Foreign Affairs Lubomír Zaorálek said that EU should focus on “economic and social convergence among EU countries, rather than attempts to distribute migrants with forced quotas.” He pointed out that in some Eastern European countries, “the most vulnerable inhabitants are often poorer than the incoming migrants themselves.”

Zaorálek added that “people who are coming have no real interest in being integrated” and want to live with their “partners from similar cultural, ethnic, religious backgrounds.” He said that people in Central and Eastern Europe do not want to “repeat the mistake of the Western countries” which have “neighborhoods full of thousands and thousands of people living in imperfect living conditions” and which are “very risky, not only during the night but also during the day.” He pointed out that “there are no suicide bombers among Ukrainians or Vietnamese,” two long-established communities in the Czech Republic.

In Slovakia, Prime Minister Robert Fico said that mass migration and forced multiculturalism would change the essence of his country:

“I think it is the duty of politicians to talk about these things very clearly and openly. I do not want to see a Muslim community in Slovakia. I do not want there to be several tens of thousands of Muslims who gradually begin to promote their ideology. We do not want to change the traditions of this country, which are built on the Christian tradition. It has been like this for centuries. Sovereignty and national pride must be part of our ruling coalition.”

Fico added that 95% of so-called refugees were actually economic migrants:

“We will not assist in this folly with arms opened wide with the notion that we will accept them all regardless of whether they are economic migrants or not. We must start telling the truth about migration.”

In Hungary, Prime Minister Viktor Orbán has warned of the “explosive consequences” of a culture clash between Europe and migrants from the Muslim world:

“To understand what we must do, we need to grasp the true nature of the situation we are facing. Europe is not in the grip of a ‘refugee problem’ or a ‘refugee situation,’ but the European continent is threatened by an ever mounting wave of modern-era migration. Movement of people is taking place on an immense scale, and from a European perspective the number of potential future immigrants seems limitless.

“With each passing day we see that hundreds of thousands have been turning up and clamoring at our borders, and there are millions more intending to set out for Europe, driven by economic motives….

“We must acknowledge that the European Union’s misguided immigration policy is responsible for this situation. Irresponsibility is the mark of every European politician who holds out the promise of a better life to immigrants and encourages them to leave everything behind and risk their lives in setting out for Europe. If Europe does not return to the path of common sense, it will find itself laid low in a battle for its fate….

“Let us not forget that those arriving have been raised in another religion, and represent a radically different culture. Most of them are not Christians, but Muslims. This is an important question, because Europe and European identity is rooted in Christianity. Is it not worrying in itself that European Christianity is now barely able to keep Europe Christian? If we lose sight of this, the idea of Europe could become a minority interest in its own continent.”

Referring to Hungary’s occupation by the Ottoman Empire from 1541 to 1699, Orbán said:

“I think we have a right to decide that we do not want a large number of Muslim people in our country. We do not like the consequences of having a large Muslim community that we see in other countries and I do not see any reason for anyone else to force us to create ways of living together in Hungary that we do not want to see. That is a historical experience for us.”