We’ve noted several times in recent months that, despite the ‘economic recovery’, a record number of young ‘adults’ are moving back home with mom and dad after college and staying there well into their 30’s.

Now, as confirmed by a recent study conducted by Fidelity and the Stanford Center on Longevity, the added stress of caring for all those ‘adult’ children is putting a severe emotional and financial strain on Baby Boomers with over 75% saying their adult children are cutting into their budgets and over 50% saying they’re generally less happy about life.  Per Fidelity:

Adult children who move back home is a common event mdash; one in nine Boomer parents surveyed said their kids returned “to the nest” in the past year. And it’s taking a toll: 68 percent of parents reported they are more stressed, and more than half said they are less happy (53 percent), less satisfied (54 percent) and have less leisure time (53 percent). Those new housemates come at a cost: 76 percent of parents said they face higher expenses. The health impacts are significant for women, as 46 percent reported sleeping worse and 40 percent reported gaining weight.

At one point in time in America, living at home with mom and dad after crossing out of your teenage years and into your 20s was embarrassing and something that was generally avoided at all costs.  And while hard times come and go, 20-somethings who were forced back into their parents’ care worked their tails off until they could save up enough money to once again regain their freedom.

That said, these Boomer parents shouldn’t expected their basement-dwelling snowflakes to leave the nest, for the second time, anytime in the near future because, as we pointed out a few weeks ago, roughly one-third of all millennials live at home with their parents and one-fourth of them can’t be bothered with enrolling in school or finding a job.

According to the following chart from Bloomberg, there are 2.2 million millennials who live at home with mom but neither attend classes nor have a job.  Of those, 40% of them are already in their 30’s, they’re predominantly white and have a high school diploma of less. 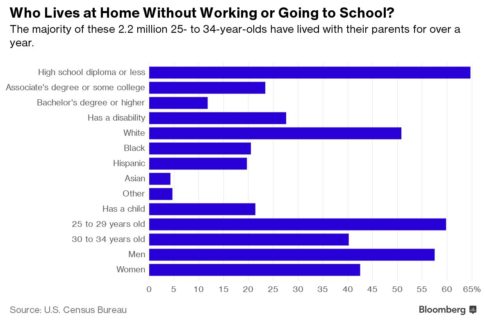 And since they’re not employed, it’s only logical that 90% of the millennials living at home last year are still there this year.

“Almost 9 in 10 young people who were living in their parents’ home a year ago are still living there today, making it the most stable living arrangement for young adults,” the report said. “In 2005, the majority of young people lived independently in their own household (either alone, with a spouse, or an unmarried partner), which was the predominant living arrangement in 35 states. By 2015—just a decade later—only six states had a majority of young people living independently.”

Meanwhile, for the first time in history, more young adults today are living at home with mom and dad than with a spouse. 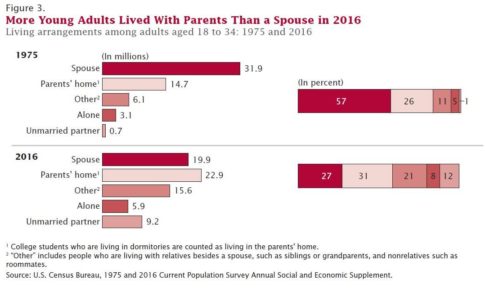 We continue to be shocked that all of those kids out there with $250,000 Art and Anthropology degrees are finding it difficult to land their dream jobs.

“Now it’s up to a third of all Millenials (1985-2005) are either still living with or have moved back with their parents either because they are incapable snowflakes or financially incapable of starting off.

We really have messed up.”