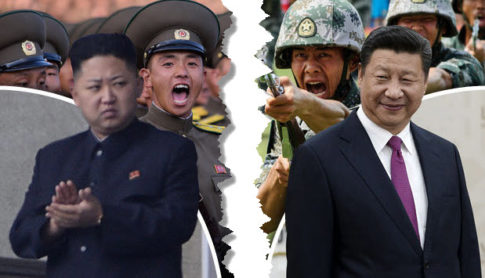 Earlier this morning we reported that according to Korea Times, China had allegedly sent North Korea what amount to a final warning over its military provocations. The rumor cited the May issue of Hong Kong monthly news outlet Dong Xiang. It said a Chinese Ministry of Foreign Affairs junior minister invited Park Myung-ho, an official of North Korea, for a meeting. China’s Foreign Minister Wang Yi attended the meeting and asked his junior to read aloud the warning to the North over the nuclear test. The memorandum mentioned that China will condemn strongly, pull back on all economic cooperation and even blockade North Korea if it conducted the test.

In an almost unprecedented criticism of China on Wednesday, North Korea’s state media said Chinese state media commentaries calling for tougher sanctions over Pyongyang’s nuclear program were undermining relations with Beijing and worsening tensions. As Reuters reports, a commentary carried by the official Korean Central News Agency (KCNA) slammed China’s “insincerity and betrayal,” referring to recent commentaries in China’s People’s Daily and Global Times newspapers, which it said were “widely known as media speaking for the official stand of the Chinese party and government.”

The response was terse and aggressive…

“A string of absurd and reckless remarks are now heard from China every day only to render the present bad situation tenser.”

“China had better ponder over the grave consequences to be entailed by its reckless act of chopping down the pillar of the DPRK-China relations,”

The KCNA commentary charged that the Chinese articles had attempted to shift the blame to Pyongyang for “deteriorated relations” between China and North Korea and U.S. deployment of strategic assets to the region. It also accused China of “hyping up” damage caused by North Korean nuclear tests to China’s three northeastern provinces.

Chinese state media calls for North Korea to dismantle its nuclear program were “a wanton violation of the independent and legitimate rights, dignity and supreme interests” of North Korea and constituted “an undisguised threat to an honest-minded neighboring country which has a long history and tradition of friendship,” it said.

North Korea’s “media” responded by explaining that the nuclear program was needed for the “existence and development” of the country and “can never be changed nor shaken.”

The bottom line is that the window for threading a diplomatic solution, brokered by China, is closing rapidly…

“The DPRK will never beg for the maintenance of friendship with China.”