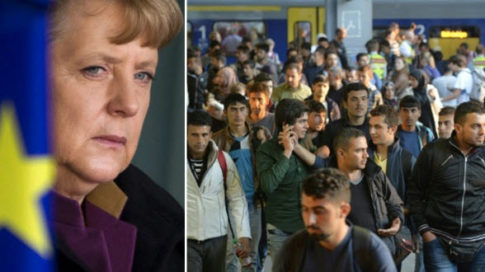 Authored by Vijeta Uniyal via The Gatestone Institute,

At the height of the European migrant crisis in early 2016, when masses of migrants were pouring into Europe, the German Green Party Chairwoman Katrin Göring-Eckardt could not control her joy. “We have just received an unexpected gift in the form of people,” she told her fellow Germans, reminding them to be grateful. This gift, she said, was going to make the country “more religious, more colourful, more diverse and younger.” It was gift, it turns out, that keeps on giving.

According to the country’s annual crime report, compiled by the Federal Crime Bureau (BKA), there has been a more than 50% rise in migrant crime in the country compared to the year before.

The German newspaper Die Welt, which received an advance copy of the annual crime report, wrote:

“The number of immigrants suspected of criminal acts in 2016 has risen by 52.7 percent, to the figure of 174,438, compared to the previous year. To ensure a fair comparison with the rest of the population, crimes that only immigrants can commit, such as illegal entry to the country, have been taken out from the statistics. The annual police report (PKS) shows that there were total of 616,230 crime suspects of foreign origin last year. The migrant share [of total crime figures] was disproportionately large, namely 174,438 — more than a quarter.”

These staggering crime statistics are even more alarming if one looks through the narrow definition German government uses to denote a “criminal migrant”. As Die Welt explains, these crime figures do not take into account “foreigners who have been living and working in Germany for some time, but only a specific group of protection-seekers [refugees].”

In a sane world, the government would take steps to protect its own citizens from such “protection-seekers”. Not in Merkel’s Germany.

What is relevant is not only what these official crime statistics reveal, but what they conceal. The actual crime share of these “protection-seekers” is much higher if one considers the fact that more than 30% of them are serial offenders and 5% of them have been booked on criminal charges at least 6 times — a mind-boggling number given their relatively recent arrival in the country.

These new entrants make up less than 2% of the German population, but constitute 9% of Germany’s criminal population. They not only indulge in petty crime but have come to dominate serious and violent crime in Germany. Nearly 15% of all suspects charged with serious bodily harm, rapes and sexual assaults come from this group, the police crime report reveals.

The German government’s denial of surging migrant crime wave has led to the systemic under-reporting and suppression of information about migrant crimes. Take, for example, Berlin, where a left-wing state government keeps police chronically disarmed, even of defensive gear such as bulletproof vests, let alone firearms. The Berlin government prohibits law enforcement agencies from using video surveillance in the German capital, on the grounds of “civil rights”.

To highlight the rampant lawlessness in Berlin, a TV crew from the German cable network SAT1 installed its own surveillance cameras around Berlin’s well-known Kottbusser Tor no-go zone. Last year, the Berlin police registered 1,600 crimes around Kottbusser Tor. An ordinary television crew, however, managed to record hundreds of crimes in just 48 hours. According to journalist and moderator Claus Strunz:

“Our 9 cameras monitored the area [Kottbusser Tor] for 48 hours. And on the video feed — we can’t say the exact number — but there are hundreds of crimes that would have otherwise gone undiscovered… And the parents [living in the area] say that in the year and a half since [uncontrolled migration began], they don’t let their daughters walk alone on the street… either day or night.”

As no act of journalistic insubordination against Merkel’s “Refugees Welcome” directive goes unpunished, Claus Strunz was attacked by a journalist colleague for “politicising” his current affairs show. He was called a “populist” — dog-whistle-talk for a far-right sympathiser — a potentially suicidal career move for any journalist wishing to work in Germany.

Strunz was also one of the few German journalists who cared to highlight the plight of the families of the victims of the last year’s Christmas market attack, in which a Tunisian Islamist migrant drove a truck loaded with 20 tons of steel beams into a busy Christmas market in Berlin. He murdered 12 people and injured 48 others.

The German mainstream media evidently decided not to personalize the stories of the Berlin terror victims. In a telling move, Merkel government categorized the victims of that attack as victims of regular “traffic accident”. For Merkel and Germany’s ruling establishment, apparently, the victims of migrant crimes and terror are nothing more than unfortunate roadkill on the way towards a multicultural paradise.

Rather than tackling the migrant crime wave, the Merkel government has chosen to spin the facts and bury the truth.

“Refugees aren’t more criminal than Germans,” a senior official from Germany’s Ministry of the Interior claimed last summer. He further maintained that, according to the Ministry’s calculations, “migrants hardly committed any sexual assaults and murders.” That statement was made barely six months after mass sexual assaults on New Year’s Eve in Cologne.

When Chancellor Merkel began her re-election bid five months ago, she described migrant crimes as “terrible isolated incidents” for which she wanted to see “tough sentencing.”

So how does “tough sentencing” look like under Merkel’s watch? For those New Year’s Eve assaults in Cologne, where some two thousand Muslim men raped, assaulted and robbed more than 1200 women, almost all of the attackers managed to walk free. They did not even see a judge, let alone face punishment. Despite hundreds of testimonies by victims, countless reliable eyewitnesses and endless surveillance footage, the Interior Minister of North Rhine-Westphalia state, where Cologne is located, admitted that “most of the cases will remain unsolved.”

With five months to go until the German elections, Merkel’s government has decided to address the problem by instituting an €18 million study to probe the issues of “migration and integration.”

That is just peanuts compared to what Merkel is willing to pay for her “refugee” policy. Her decision to offer asylum to more than one million migrants will cost country’s taxpayers up to €1.5 trillion, according to the prominent German economist Bernd Raffelhüschen. In the best-case scenario, Raffelhüschen estimates, the cost of Germany’s migrant policy will be around €878 billion. “If the second generation [of the migrants] cannot be integrated into the workforce at par with the native population, these costs will go up to €1.5 trillion,” Raffelhüschen told Die Welt. Raffelhüschen’s calculations, published last year, only take into account the migrant intake of 2015; they do not include any present or future migrant waves.

Germany’s Federal Integration Commissioner and Merkel-confidant Aydan Özoguz is pushing for migrants to be granted voting rights similar to German citizens in any national referendum — regardless of their legal status. According to an advisory report recently co-authored by Özoguz, “people who permanently live in a country should be able to participate in democratic decision making.”

Özoguz, who helped shape Merkel’s refugee policy of opening up Europe to millions of migrants from Arab and Muslim countries, with her proposal to grant voting rights to migrants, is creating a roadmap for a radical transform of Germany — and by default that of the continental Europe

To offset the recent rise of right-wing political party, Alterative für Deutschland (AfD), the German political establishment sees the empowerment of such a vast new wave of migrants as a political counterweight.

Ever since Merkel opened Europe’s borders in the spring of 2015 by arbitrarily suspending the existing EU-wide border regulations (Dublin II), Europe has been dragging itself ever deeper into a self-inflicted migrant crisis. European mainstream media may keep on putting a positive spin on Merkel’s “courageous” and “selfless” stance, but her policy continues to incur heavy economic, social and human cost, not only on Germany, but on the cultural future of European civilization.