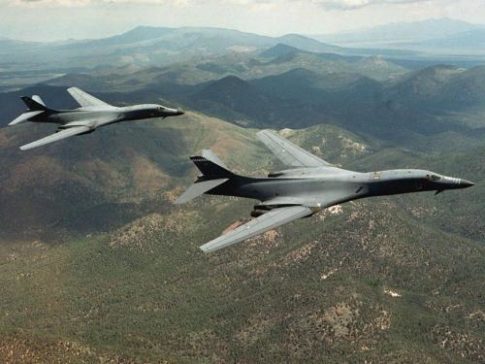 A pair of B-1B Lancer bombers

Another day, another jawboning escalation out of North Korea, which on Tuesday accused the US of pushing the Korean peninsula “to the brink of nuclear war” after two strategic U.S. bombers flew training drills with the South Korean and Japanese air forces in another show of strength. As Reuters reports, the two supersonic B-1B Lancer bombers were deployed amid rising tensions over North Korea’s pursuit of its nuclear and missile programs.

North Korea said the bombers conducted “a nuclear bomb dropping drill against major objects” in its territory at a time when Trump and “other U.S. warmongers are crying out for making a preemptive nuclear strike” on the North.

“The reckless military provocation is pushing the situation on the Korean peninsula closer to the brink of nuclear war,” the North’s official KCNA news agency said on Tuesday.

“Any military provocation against the DPRK will precisely mean a total war which will lead to the final doom of the US.”

The US air force said in a statement the bombers had flown from Guam to conduct training exercises with the South Korean and Japanese air forces.

The bombers departed Andersen Air Force Base, Guam, to conduct “bilateral training missions with their counterparts from the Republic of Korea and Japanese air forces,” said Lt Col Lori Hodge, PACAF public affairs deputy director. Hodge did not specify how close the bombers flew to the Korean Demilitarized Zone, known as the DMZ, but said they were escorted by South Korean fighter jets.

When asked if the bombers were carrying weapons, the command wouldn’t disclose, citing standard operating policy. In September, the service put on a similar show of force over South Korea, deploying B-1B bombers alongside South Korean fighter jets after another nuclear test from North Korea. The U.S. military has maintained a deployed strategic bomber presence in the Pacific since 2004.

While Hodge said the training was routine, the recent flyover marks another in a series of events the U.S. has taken to deter North Korea’s Kim Jong Un from additional ballistic missile tests — the latest which occurred April 28.

Ironically, the flight of the two bombers on Monday took place roughly at the same time as Donald Trump said he would be “honored” to meet North Korean leader Kim Jong Un in the right circumstances, and as his CIA director landed in South Korea for talks. South Korean Defense Ministry spokesman Moon Sang-gyun told a briefing in Seoul that Monday’s joint drill was conducted to deter provocations by the North.

Also overnight, Reuters reported that the U.S. military’s THAAD anti-missile defense system has reached operational capacity in South Korea, although they added that it would not be fully operational for some months. China has repeatedly expressed its opposition to the system, whose powerful radar it fears could reach inside Chinese territory. Foreign Ministry spokesman Geng Shuang again denounced THAAD on Tuesday.

“We will resolutely take necessary measures to defend our interests,” Geng said, without elaborating.

Asked about Trump’s suggestion he could meet Kim, Geng said China had noted U.S. comments that it wanted to use peaceful means to resolve the issue. Trump has been recently been full of praise of Chinese President Xi Jinping’s efforts to rein in its neighbor. “China has always believed that using peaceful means via dialogue and consultation to resolve the peninsula’s nuclear issue is the only realistic, feasible means to achieve denuclearisation of the peninsula and maintain peace and stability there, and is the only correct choice,” Geng told a daily news briefing.

It was widely feared North Korea could conduct its sixth nuclear test on or around April 15 to celebrate the anniversary of the birth of the North’s founding leader, Kim Il Sung, or on April 25 to coincide with the 85th anniversary of the foundation of its Korean People’s Army. The North has conducted such tests or missile launches to mark significant events in the past. Instead, North Korea conducted an annual military parade, featuring a display of missiles on April 15 and then a large, live-fire artillery drill 10 days later.

So far the joint US-Chinese deterrence appears to be having an effect on the Kim regime.