$60 million to $100 million and a few dead bodies for entertainment!

And probably just a ‘coincidence’: 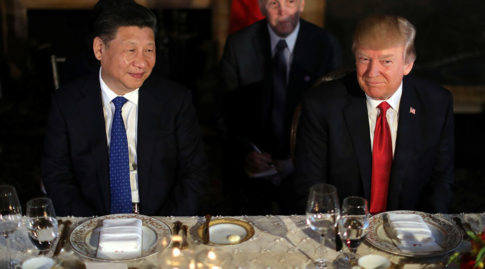 The 59 Tomahawk cruise missiles the US launched against Syria last month was just “after-dinner entertainment,” which “did not cost the president anything,” the US commerce secretary said, while President Trump called the attack a “tough decision.”
US Commerce Secretary Wilbur Ross delivered the controversial comments while speaking at the Milken Institute Global Conference on Monday, according to Variety.

US President Donald Trump’s executive order to launch an attack on a Syrian military airfield on April 7 in response to an alleged chemical attack in the town of Khan Shaykhun, which killed around 80 people on April 4, was apparently just “after-dinner entertainment,” according to Ross. The missile volley killed at least 14 people, including nine civilians.

“Just as dessert was being served, the president explained to [China’s President Xi Jinping] he had something he wanted to tell him, which was the launching of 59 missiles into Syria,” Ross said. “It was in lieu of after-dinner entertainment.”

While the estimated cost of the strike ranged from roughly $60 million to $100 million depending on which Tomahawk missile modification was used, Ross stated that it “didn’t cost the president anything to have that entertainment.”

The comments came just as President Trump described his decision to attack Syria as a “tough” choice, since the “wrong people” could be killed. Trump made the comments during an interview with CBS’ Face the Nation host John Dickerson.

“But most importantly, you know, the decisions. Like, when I make the decision to go with Syria, the 59 Tomahawk missiles. Unbelievable technology. We have unbelievable talent. But those are tough decisions. Those aren’t, like, decisions that I’m going to buy a building…”

“Because it’s human lives,” Trump continued. “You’re killing people. And you can kill the wrong people, too,” he added.