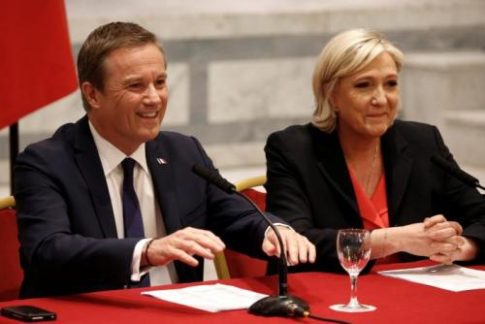 According to Reuters, Dupont-Aignan is a nationalist whose protectionist economic policies are close to those of the National Front’s Le Pen and who, like her, is urging a reduction in the powers of EU institutions. In the first round, Dupont-Aignan received 4.7%, or roughly 1.7 million votes, and on Friday announced that he was backing Le Pen for the decisive May 7 second round.

The latest polls on Friday showed Macron winning the French presidential runoff with 59-60 percent of votes, but the momentum has been with Le Pen, who has clawed back about five percentage points over the past week.

Macron and Le Pen between them accounted for only 45 percent of the first round vote, and the battle is now on for the remainder.

As Reuters adds, the presidential contest has blown apart traditional party loyalties. Voters now have a choice between a resurgent right, once a pariah in French politics, and a man whose political movement is less than a year old and who has never held elected office. It sets Macron’s enthusiasm for the EU and call for pro-business reforms to boost growth against Le Pen’s desire for France to close its borders to immigrants, unwind EU institutions and restrict imports to protect jobs.

“The May 7 election is about a European choice,” said outgoing President Francois Hollande, under whom Macron served as economy minister from 2014 to 2016 before turning his back on the Socialist government to prepare his own presidential bid.

Meanwhile, Dupont-Aignan, who stood in the election for his party ‘Stand up France’ said he had signed an agreement on the future government with Le Pen that took into account some “modifications” of her program. Dupont-Aignan is less hardline than Le Pen in some areas such as reintroduction of the death penalty, and in 2013 he said on twitter that his party “cannot align ourselves with the extreme right”. However he is seen as having hardened his position on immigration since.

Macron was on a campaign trip in central France where on Friday night he called politicians who do not back him “morally weak.” On Saturday, he said the alliance between Dupont-Aignan and Le Pen clarified the choice on offer to voters.

“The impact is limited” from Dupont-Aignan rallying Le Pen’s campaign. Le Pen can hope to gain one to two additional percentage points “and even that is doubtful” as part of those who voted for Dupont-Aignan in the first round had initially planned to vote for Republican’s candidate Francois Fillon but were disappointed by him. He added that “Dupont-Aignan won less than 5% of the votes in the first round and it’s far from enough to help (Le Pen) catch up with Macron”, which is an odd evaluation for an impartial polling organization to be making.

“The question is not who is going to win the second round, but Macron’s and Le Pen’s scores” and “by how much Macron is going to win”, which again prompts questions into the objectivity of OpinionWay, whose virtually every single poll in the past 2 weeks has at most strayed from a 60-40 breakdown for the two candidates by 1 point, prompting even the Economist to ask if the “French pollsters are cheating.”