Tillerson: “I think further it’s very important that the Russian government consider carefully their continued support of the Assad regime.“

VIX was being crushed and stocks were leaking higher just as planned, until Secretary of State Rex Tillerson hit the tape beating war drums and announcing a new US policy on Syria, just a week after he said the US had no interest in removing the Syrian president.

Specifically, Tillerson said that steps are underway to remove Syrian President Bashar al-Assad, and that the U.S. is considering an “appropriate response” to the Syrian government’s alleged use of chemical weapons.

“The process by which Assad would leave is something that requires an international community effort both to first defeat ISIS within Syria, to stabilize the Syrian country to avoid further civil war and then to work collectively with our partners around the world through a political process that would lead to Assad leaving,” Tillerson said at the news conference in Palm Beach, Fla.

Tillerson on Assad: “Clearly with the acts that he has taken it would seem there would be no role for him to govern the Syrian people.” pic.twitter.com/Nr5BcHJmz1

Tillerson also called into question Assad’s future in Syria, saying there would be “no role” for authoritarian ruler in Syria, and said that there is no doubt the Assad regime was reponsible for the Syria attack.

As a result, Tillerson said that “Assad’s role in the future is uncertain clearly, and with the acts that he has taken it would seem that there would be no role for him to govern the Syrian people”

Acknowledging that a conflict with Syria would involve Russia, Tillerson said that “it’s very important that the Russian government consider carefully their continued support of the Assad regime.”

All of which was a quick U-turn from last Thursday’s comments when Tillerson said that “I think the longer term status of President Assad will be decided by the Syrian people,” a statement which as we reported infuriated John McCain.

The reaction in the market was quick: 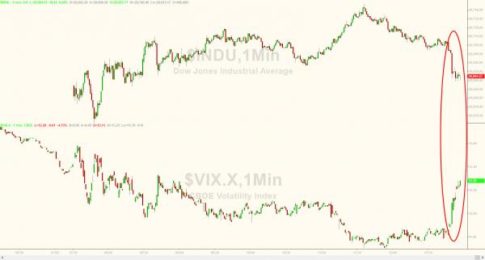 … sending The Dow briefly red for the day.

While he has yet to frame his new policy on Syria, President Trump also had some “insight into next steps regarding Assad.

“He’s there, and I guess he’s running things, so I guess something should happen.”

And just like that, the conflict between the US and Russia over the future of Syria – and of course that Qatar gas pipeline to Europe which started it all – is back on.