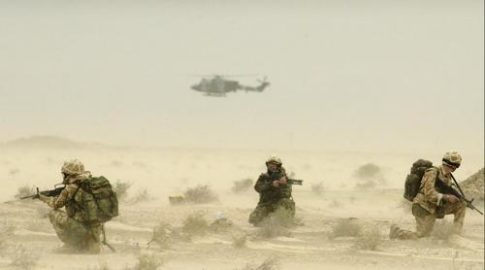 The Trump administration has stopped disclosing material information about the size and nature of the U.S. commitment to military action in Iraq and Syria, including the number of U.S. troops deployed in either country, in a bid to “surprise” the Islamic State with the number of US troops in the region the LA Times reports.

Earlier this month, the Pentagon quietly dispatched 400 Marines to northern Syria to operate artillery in support of Syrian militias that are cooperating in the fight against Islamic State, according to U.S. officials. That was the first use of U.S. Marines in that country since its long civil war began. In Iraq, nearly 300 Army paratroopers were deployed recently to help the Iraqi military in their six-month assault on the city of Mosul, according to U.S. officials.

The decision appears to be making good on Trump’s promise as a candidate to insist on more of an “element of surprise” in battle tactics.

“In order to maintain tactical surprise, ensure operational security and force protection, the coalition will not routinely announce or confirm information about the capabilities, force numbers, locations, or movement of forces in or out of Iraq and Syria,” said Eric Pahon, a Pentagon spokesman.

While neither of those deployments were officially announced prior to their implementation, Gen. Joseph Votel, the top US commander in the Middle East did acknowledge the additional troop presence in Syria to the House Armed Services committee on Wednesday.

“They have deployed,” Votel said, adding that there were likely more troops headed for deployment. “We have recognized that as we continue to pursue our military objectives in Syria, we are going to need more direct all-weather fire support capability for our Syrian Democratic Force partners,” Votel told the committee. “We have not taken our eye off what our principle mission is, which is to advise and assist and enable our partners… Help our partners fight, but not fight for them.”

A representative of Operation Inherent Resolve (OIR) confirmed that “routine” troop deployment announcements will stop under Donald Trump as US forces want the Islamic State terrorists to be the “first to know about any additional capabilities the Coalition or our partner forces may present them on the battlefield.”

Under the Obama administration, Pentagon policy was to announce conventional deployments after they occurred. That administration even took the unusual step of revealing in 2015 that 200 special operations forces — whose missions often are classified — had been sent to Syria. That’s now changed, according to Pentagon officials.

“The coalition commander’s intent is that ISIS be first to know about any additional capabilities the coalition or our partner forces may present them on the battlefield,” Pahon said, using an acronym for Islamic State.

Ned Price, National Security Council spokesman under President Barack Obama, criticized the new approach of Trump’s administration not to share such crucial details with Americans. “The position of the Obama administration was that the American people had a right to know if servicemen and women were in harm’s way,” Price told the LA Times. “It’s truly shocking that the current administration furtively deploys troops without public debate or describing their larger strategy.”

Currently 5,262 US troops are authorized to be in Iraq, a US military official told the Military Times last Thursday. Another 503 are authorized to be in Syria by Washington. What makes the deployment complicated is that such an authorization has not been granted by the capital Damascus, which considers the US presence an illegal invasion. The US officials further noted that the real numbers may be way larger as those figures fail to reflect those servicemen who are sent to Iraq and Syria on so-called temporary “non-enduring” missions. There are roughly 1,000 US special operations forces, Marines and Army Rangers in Northern Syria today – and that number might soon grow even larger.

Commenting on a Fox News report that the Pentagon is sending two units – comprising 200 to 300 soldiers in total – from the 82nd Airborne Division’s 2nd Brigade Combat Team (2nd BCT) to Iraq, Pahon told the Military Times, that there was no plan to announce the temporary deployment because it will last less 120 days and will not count against the authorized number of American troops in the country.

Meanwhile Operation Inherent Resolve has released its latest Combined Joint Task Force – Operation Inherent Resolve (CJTF-OIR) Monthly Civilian Casualty Report, which admitted 9 additional civilian deaths caused by the US-led coalition – five in 2017 and four more from 2015. The Pentagon has reported receiving 41 new reports of possible civilian casualties in Iraq and Syria during the month of February 2017. The report said the coalition completed the assessment on 17 reports, while a total of 43 inquiries are still open and are being probed.

Out of 17 assessed reports, the coalition dismissed twelve as “non-credible” while five were assessed to be “credible.”

Despite numerous human rights organizations’ reports of the mounting civilian death toll in Mosul, Iraq, the US-led coalition claimed it received only 15 credible reports of incidents in which civilians were killed by the time US-coordinated Iraqi forces who freed Eastern Mosul in February.

“In Mosul, Iraq, since the start of operations to liberate the city on Oct. 17, 2016, to the liberation of the East side of Mosul on Feb. 18, 2017, the total number of reports of possible civilian casualties was 37. The total number of credible reports during this time period was 15,” the US-led coalition said, without specifying how many civilians were killed in these incidents.

The Pentagon said that in total from August 2014 to February 2017, the coalition conducted a total of 18,645 strikes that included 42,089 separate engagements accidentally killing 229 civilians. Meanwhile, rights groups and activists such as the UK-based monitoring group Airwars, believe the number could be more than 10 times higher.