On a superficial level, Trump and Bush couldn’t be more different from Clinton and Obama.  Indeed, pollsters say that many people voted for Trump because they wanted change … Just like they voted for Obama because he promised “hope and change” from Bush-era policies.

But beneath the surface, Trump, Obama, Bush and Clinton are all very similar on 4 core issues.

Bush intentionally lied us into the Iraq war … a war which had no relation with U.S. security or defense.

Clinton and Obama intentionally lied us into various “humanitarian wars” … which had nothing to do with our security or defense.

And the same idiots who lied us into the Iraq war are now trying to lie us into a cold (or maybe even hot) war with Russia.

And what about Trump?

He campaigned on peace and non-interventionism …

But he’s already ramped up the war in Syria.

And the war in Yemen. … where the U.S. and Saudi Arabia are committing war crimes.

And Trump’s top advisor is predicting war with China and Russia. He said:

So it doesn’t look like peace is going to break out any time soon.

And sadly, top experts say the geopolitical policies pursued by Trump – which are very similar to those pursued by Obama, Bush and Clinton – will lead to more terrorism.

Obama, Bush and Clinton all pushed economic policies which made the rich richer, and the poor poorer.

Bush and Obama bailed out the big banks, threw fistfuls of money at the banksters, and otherwise rewarded Wall Street and penalized Main Street.

Clinton repealed the Depression-era law which separated regular deposit banking and speculation (Glass-Steagall), allowed the giant banks to grow into mega-banks, and acted as a cheerleader for unregulated derivatives. And Clinton – like Bush and Obama – decided that white collar financial fraud didn’t exist, or at least shouldn’t be prosecuted.

What’s the effect of these policies? 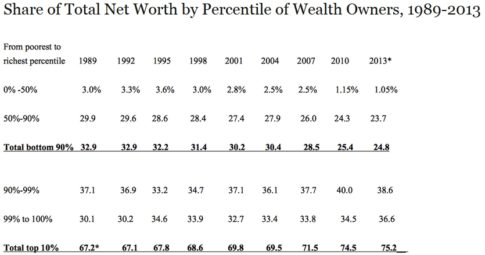 Real wages plummeted through the Clinton, Bush and Obama administrations.

He’s appointed the sameold bankster cronies.  Nothing will change. (And unfortunately, it’s not too early to criticize a new president.)

The NSA’s mass surveillance on Americans started by 1999 or earlier … under the Clinton administration.

3 months before 9/11, the head of the NSA admitted that the NSA was collecting so much information from spying that it was drowning in too much data.

Mass surveillance expanded under Bush … and then even more under Obama.

It’s gotten to the point that the government is spying on virtually all of our electronic communications and transactions.

Given that he’s called for whistleblowers like Snowden and Assange to be executed for treason, and quickly implemented gag orders as soon as he took office, he is almost certain to continue the expansion of mass surveillance on the American people.

In other words, a president who severely punishes anyone trying to reveal the extent of spying on Americans probably has no intention of reigning it in.

Saudi Arabia is the world’s largest sponsor of radical Islamic terrorists. The Saudis have backed ISIS and many other brutal terrorist groups. And the most pro-ISIS tweets allegedly come from Saudi Arabia.

According to sworn declarations from a 9/11 Commissioner and the Co-Chair of the Congressional Inquiry Into 9/11, the Saudi government backed the 9/11 hijackers (see section VII for details). And declassified documents only amplify those connections. And the new Saudi king has ties to Al Qaeda, Bin Laden and Islamic terrorism.

Saudi Arabia is the hotbed of the most radical Muslim terrorists in the world: the Salafis (both ISIS and Al Qaeda are Salafis).

And the Saudis – with U.S. support – back the radical “madrassas” in which Islamic radicalism was spread.

And yet the U.S. has been supporting the Saudis militarily, with NSA intelligence and in every other way possible through the Clinton, Bush and Obama administrations.

He’s selling them massive amounts of arms, keeping them off of the list of restricted countries for immigration, and supporting Saudi war crimes in Yemen.

It appears that the voters have been played … again.

Postscript:  If you think that the presidents are more different than we’re giving them credit for, then you must conclude that they have been overridden by other forces. In that case, you may wish to consider consider whether the Deep State and big banks have more power than democratically-elected officials.