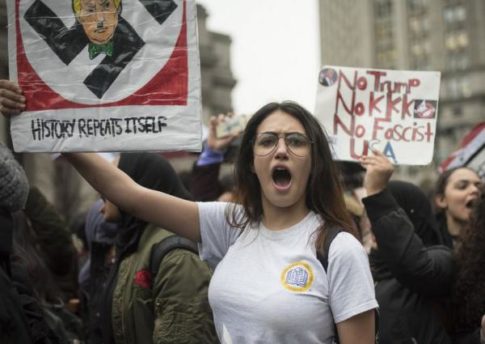 Armed with the infinite wisdom they’ve managed to garner in their ~14 years on planet earth, hundreds of New York City high school students decided to ditch class yesterday to protest Trump and his “fascist” policies.  Carrying signs comparing Trump to Hitler and calling on fellow protesters to “Punch a Nazi,” the AWOL youngsters, emboldened by a cute, if delusional and naive, sense of grandeur compared their efforts to youth involvement in the civil rights movement and Tiananmen Square.  Per the Gothamist:

Jamal, a Palestinian-American Muslim and seasoned activist, wasn’t deterred when Seattle Judge James Robart ruled to temporarily suspend the policy. “I think we need to capitalize on this momentum,” Jamal told Broadly in a recent interview. “I think protests and the total outrage were what made the judge and parts of government realize it may take sacrificing your job. I want more of that: people willing to risk something for the greater good.”

“Everyone should have a voice, especially us,” Jordan, a 14-year-old freshman at Beacon High School in Hell’s Kitchen told Gothamist. “We are the next generation and it will be up to us in the future to run the country.”

Of course, the disaffected juveniles were quick to explain that they couldn’t possibly hold their protests after school because it just wouldn’t “have the same significance” and because their conscious just wouldn’t allow them to “continue on normally with our lives and do it after school”…how convenient.

In the same Broadly interview, Jamal explained why she felt it was important not only to protest Trump and his policies en masse, but to do it in the middle of the school day:

I always hear from people, “Why can’t you just do it after school?” It doesn’t have the same significance. I always frame it in the terms of labor. When you’re a worker and you want to strike, you’re doing it as a disruptive force of your labor. “I’m not going to continue as if this is normal right now because it’s not.” I feel like it’s the same for students. We’re part of this kind of workforce. So if we’re going to protest something it makes sense to disrupt it and be part of a movement. We can’t just continue on normally with our lives and do it after school.

Meanwhile, it didn’t take long before the students realized, with the help of a couple of complicit teachers no doubt, that they should also be pissed off by the confirmation of Education Secretary Betsy DeVos due to, among other things, her investment in a debt collection agency that had the audacity to try to collect on student loan debts.

Then, just as hundreds of high school and college students left their classrooms on Tuesday to rally in Foley Square, Betsy DeVos was confirmed as Education Secretary after a history-making 50-50 vote (Vice President Mike Pence broke the tie). The scope of the protest quickly broadened, as students decried DeVos’s lack of experience and conflicts of interest, including investments in Performant Business Services, Inc., a debt collection agency that collects student loans.

“They [the students] are really woke around student loan debt, watching the generation in front of them not be able to pay their loans or find jobs,” 28-year-old organizer Carlene Pinto, campaign manager for the New York Immigration Coalition, told Gothamist. “It’s like, ‘Oh you guys are paying attention to all of the Sallie May memes on Instagram.”

Yes, heaven forbid these poor snowflakes be denied the opportunity to get their $150,000 Anthropology degree at a college of their choice and on the taxpayer dime…the sins of Nazi Germany will not be repeated on their watch.