On the heels of several public comments and tweets from President Trump with regard the bias and politicization of the judiciary in America, U.S. Supreme Court nominee Neil Gorsuch told Democratic senator Richard Blumenthal that he found the President’s comments “disheartening” and “demoralizing.”

On February 4th, President trump criticized a federal judge who blocked his travel ban as a “so-called judge.” On Wednesday, the president argued that his power to limit immigration shouldn’t be challenged in courts.

“The courts seem to be so political, and it would be so great for our justice system if they would be able to read a statement and do what’s right, and that has got to do with the security of our country, which is so important,” Trump told a conference of police chiefs and sheriffs in Washington.

“He certainly expressed to me that he is disheartened by demoralizing, abhorrent comments made by President Trump about the judiciary,” Blumenthal said at the Capitol.

“But I will be asking for more specific and forthcoming comments to those kinds of questions before I determine how I will vote.”

Blumenthal, a member of the Senate Judiciary Committee, said he brought up examples of Trump’s recent rhetoric, including the tweets and the President’s criticism of the federal court Wednesday morning before law enforcement officials.

That’s when Gorsuch expressed disappointment in Trump’s comments, Blumenthal said. “He didn’t disagree with me on that point.”

“I said to him if a litigant before your court — and the President of the United States is in fact a litigant right now in the immigration ban cases — said what President Trump said, you would hold him in contempt of court,” Blumenthal said, adding that Gorsuch did not give a response to that comment.

“I said they were more than disheartening and I said to him that he has an obligation to make his views clear to the American people, so they understand how abhorrent or unacceptable President Trump’s attacks on the judiciary are.”

Finally, Ron Bonjean, who is leading communications for Gorsuch during the confirmation process, confirmed Gorsuch called Trump’s tweet about the “so-called judge” “disheartening” and “demoralizing” in his conversation with Blumenthal.

It’s going to be tough for President Trump to swallow that from “the perfect nominee”… especially if/when the 9th Circuit Court rules against his appeal. 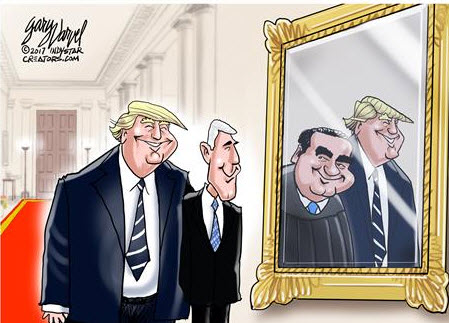 The response among some prominent conservatives such as  Laura Ingraham suggests that a major fissure may be developing between Trump and his SCOTUS nominee.

Is this a terrible sign that Gorsuch desires to fit in with the elites—or a sign that he really is that clever? https://t.co/2GXOPvBeGo

Is this a terrible sign that Gorsuch desires to fit in with the elites—or a sign that he really is that clever? https://t.co/2GXOPvBeGo