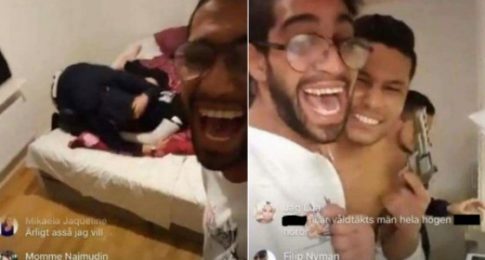 In yet another instance of the unravelling of Sweden’s social fabric, three men, 19, 24 and 25 years of age and supposedly from a migrant background, have been arrested for the aggravated rape of a Swedish woman (30), which they yesterday live streamed on a closed Facebook group.

The 24 year old suspect was known to the police, as he had been arrested before on drug and assault related offences. Last April, he was conditionally released from a four-month prison sentence, Expressen reports.

Josefine Lundgren, a young woman who witnessed the live stream and alerted the police, says one of the men pulled out a gun and taunted viewers by daring them to come over to the apartment where the three men resided. “He pulled off her clothes and lay on top of her,” Lundgren recalls.

One of the police officers who intervened was also caught on camera, as can be seen in this video footage (with the perpetrators faces blurred out).

In all, the ‘incident’ seems to add to a long list of reasons why Swedes might want to reconsider the volatile combination of having a lavish welfare state, open borders for Middle-Eastern migrants and a seemingly endless tolerance for foreign delinquency.

But as long as the Swedish government actively obstructs studying the correlation between immigrants and crime, while maintaining “the Swedish model is hotter than ever“, actual change seems unlikely.