– White House Reveals How Mexico May Pay For The Wall: A 20% Border Tax:

Some more clarity from Spicer who told reporters the Trump Administration was speaking theoretically about tariffs on Mexico and the 20% border tax floated earlier today is just one solution.

He said the White House was looking for ways to pay for wall along southern border of Mexico, job is to show there are ways to do it

Tariffs could be drafted to focus on a particular sector, no specifics yet on what cos. this tax would apply to, he says

He added that the White House not ready to roll out any border tax at this time, and will continue to have open line of communication with Mexico after Mexican President Enrique Pena Nieto canceled plans to meet with President Trump; Spicer says cancellation was mutual decision

Another story whch needs to be appended, because as NBC’s Peter Alexander tweets, According to Spicer the 20% tax on Mexican imports is not a policy proposal but merely an example of options how to pay for the wall.

BREAKING: Spicer tells me 20% tax on Mexican imports is NOT a policy proposal, but example of options how to pay for wall.

Speaking to reporters aboard Air Force One, White House press secretary Sean Spicer said that as part of its plans to make Mexico “pay for the wall”, the Trump administration is considering a 20% border tax on Mexican imports.

In a brief gaggle on the way back from Philadelphia, Spicer said that POTUS has decided how to pay for the border wall: “by imposing a 20 percent tax on all imports from Mexico.”

He did not give any details about that tax, how it would work, and he described it as a beginning of a process that would be part of overall tax reform. But he did describe this as a decision that POTUS has made.

“When you look at the plan that’s taking shape now, using comprehensive tax reform as a means to tax imports from countries that we have a trade deficit from, like Mexico. If you tax that $50 billion at 20 percent of imports — which is by the way a practice that 160 other countries do — right now our country’s policy is to tax exports and let imports flow freely in, which is ridiculous. By doing it that we can do $10 billion a year and easily pay for the wall just through that mechanism alone. That’s really going to provide the funding.”

The proposal, as explained by Spicer, appears to be similar to the Border-Adjustment Tax provision floated previously, that would tax U.S. businesses’ imports included in a House Republican tax plan.  The so-called border adjustment provision is part of a broader plan to bring the corporate tax rate down from 35 percent and 20 percent.  Trump previously dismissed the plan in an interview with The Wall Street Journal as being “too complicated.” While benefiting exporters, such as U.S.-based aerospace companies, it could hurt retailers and other American companies that manufacture goods overseas to sell in the U.S. That would result in higher prices for American consumer goods.

“This is something that we’ve been in close contact with both houses in moving forward and creating a plan. It clearly provides the funding and does so in a way that the American taxpayer is wholly respected.”

Spicer said that “we are probably the only major country that doesn’t treat imports this way” and added “this gets us in line frankly with the policies that the other countries around the world treat our products.”

The highly sensitive subject of payment for the “wall” is the reason why president Pena Nieto cancelled a trip to the US on January 31 to discusses the renegotiation of NAFTA.

While Nieto has said Mexico will not pay for the wall, Trump has repeatedly said that Mexico will end up paying, even if the US makes the initial payment; as reported earlier, Republicans have estimated the wall will cost between $12 billion to $15 billion.

Since roughly 80% of Mexican exports go to the US, (representing around 13% of US imports, or amounting to $295 billion in 2015) Mexico finds itself in a very difficult negotiating position, in which Trump has all the leverage. On the other hand, since a 20% tax would inevitably result in a similar surge in prices of imported goods, no matter who ends up winning this particular negotiation, it will be the US consumer who foots the bill.

As a result of the barrage of today’s Mexico-related headlines, peso traders have had a, how shall we put it, stressful day. 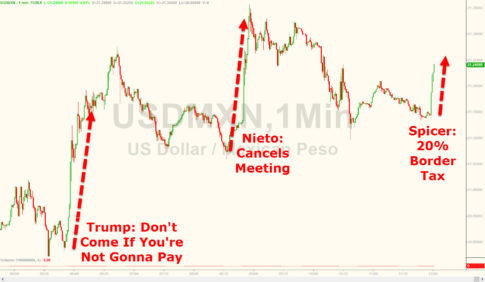