record amount of rainfall in Australia has closed its famous national park at Uluru in what meteorologists described as a “twice a century” weather event.

Waterfalls have formed all over the park’s huge sandstone landmark, which is also known as Ayers Rock and is  among Australia’s top tourist attractions in the Northern Territory.

“There’s a lot of water coming off the rock and what that does is just channels across the ring road around Uluru,” said park ranger Mike Misso.

“Some of those roads there were flooded by about 300-400mm of rain. Quite spectacular but very hazardous road conditions.” 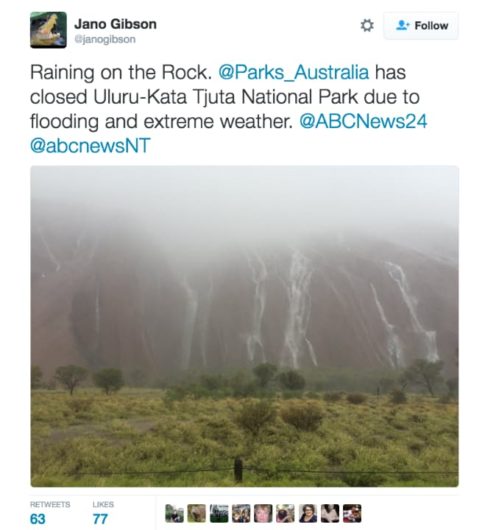 Rangers were forced to close the park at 9am on Boxing Day due to flooded roads and a risk of car accidents.

The heavy rain also led to flash flooding in the nearby town of Kintore, which saw 25 houses flooded and forced dozens to evacuate the area.

“There’s a significant number of houses that have been affected by flooding in some capacity,” Acting Superintendent Pauline Vicary told ABC News. 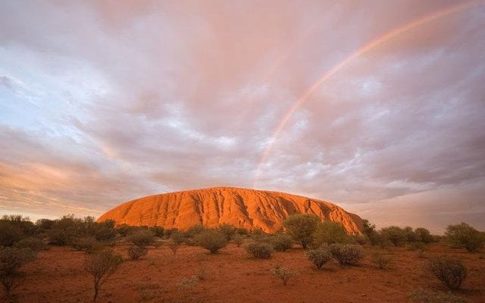 “It is a remote area and it’s quite tricky, all the roads are impassable from the [Northern Territory] side into Kintore at the moment, and the Western Australia access is also significantly impaired. It’s quite dangerous to get though, so it’s obviously going to impair us getting resources in there.”

Kintore was almost completely cut off by the flooding, and so were the nearby towns of Papunya and Yulara, she said.

In Yulara, the town square was inundated and had to be drained by firemen.

No one has been injured in the flooding, though there has been damage to fences in Kintore, while some cars have been submerged.

There were fears on Monday that a carload of people travelling to Kintore from Western Australia may have been caught up in the floods.

Police said they had been unable to fly to some of the worst affected areas due to poor visibility.