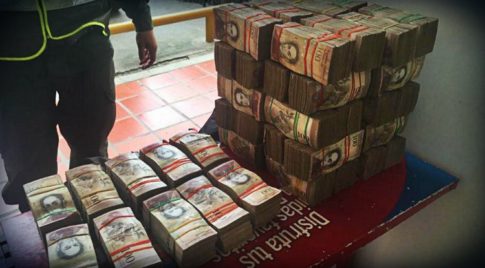 Having observed the economic chaos to emerge as a result of India’s shocking Nov. 8 demonetization announcement, and perhaps confident it can do better, today president Nicolas Maduro of Venezuela, Latin America’s most distressed economy, mired in an economic crisis and facing hyperinflation, likewise shocked the nation when he announced on state TV that just like India, Venezuela would pull its highest denominated, 100-bolivar bill (which is worth about two U.S. cents on the black market), from circulation over the next 72 hours, ahead of the introduction of new, higher-value notes, as large as 20,000.

“I have decided to take out of circulation bills of 100 bolivars in the next 72 hours,” Maduro said. “We must keep beating the mafias.”

To this we would add “and cue economic chaos”, but since this is Venezuela, that’s a given.

The surprise move, announced by Maduro during an hours-long speech, is likely to worsen a cash crunch in Venezuela, and lead the largely-cash based economy to a state of paralysis. Maduro said the 100-bolivar bill will be taken out of circulation on Wednesday and Venezuelans will have 10 days after that to exchange those notes at the central bank.

Critics immediately slammed the move, which Maduro said was needed to combat contraband of the bills at the volatile Colombia-Venezuela border, as economically nonsensical, adding there would be no way to swap all the 100-bolivar bills in circulation in the time the president has allotted. Indeed, if India is any example, Venezuela – whose economy is far worse than that of India, the world’s fastest growing emerging market – may have just signed its own economic death warrant.

According to central bank data, in November there were more than six billion 100-bolivar bills in circulation, 48 percent of all bills and coins. In other words, Venezuela just eliminated half the paper cash in circulation.

Authorities on Thursday are due to start releasing six new notes and three new coins, the largest of which will be worth 20,000 bolivars, less than $5 on the streets. No official inflation data is available for 2016 though many economists see it in triple digits. Economic consultancy Ecoanalitica estimates annual inflation this year at more than 500%, close to the IMF’s estimate. 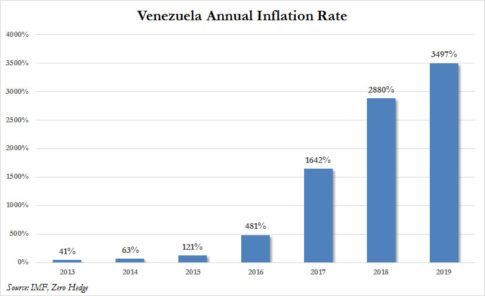 Meanwhile, assuring hyperinflation next year will be a doozy, the oil-producing nation’s bolivar currency has fallen 55% against the U.S. dollar on the black market in the last month. 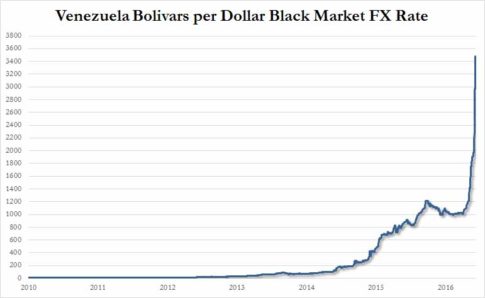 Money supply, the sum of cash and checking deposits as well as savings and other “near money” deposits, was up a staggering 19% in the three weeks to Dec. 2 and the curve has been exponential since Maduro’s predecessor Hugo Chavez came to power in 1999.

Maduro previously has said that organized crime networks at the Colombia-Venezuela border buy up Venezuelan notes to in turn buy subsidized Venezuelan goods and sell them for vast profits in Colombia.

While smuggling of this sort is an issue at the border, it cannot account for nationwide shortages of the most basic goods from food to medicine, which have left millions hungry and doctors crying out for help. As we reported previously paying a restaurant or supermarket bill without a debit or credit card can often require a backpack full of cash. However, getting cash in recent months has proven difficult, and the country’s credit-card machines have recently suffered problems, leaving many businesses asking customers to pay by bank transfer.

As Reuters adds, strict currency controls introduced in 2003 that pegged the bolivar to the dollar, coupled with heavy reliance on oil, are seen as the root of the crisis by most economists. Maduro has blamed an “economic war” being waged against his government by the opposition and the United States.

With Venezuela’s move, we can now add the insolvent Latin American country to an increasingly large group of countries including India, Sweden, and Australia, which in recent months have been on a quiet crusade to eliminate all forms of paper money. Certainly, Venezuela will not be the last as only full control over a nation’s currency will allow governments to enact global negative rates, something which is inevitable once the current “Trumpflation” euphoria finally ends.