“We are entering a very dark phase in this battle to retain our liberty,” warns Armstrong Economics’ Martin Armstrong, adding that “this is the most dangerous period we are heading into for governments will respond only to their own self-interest to survive.” 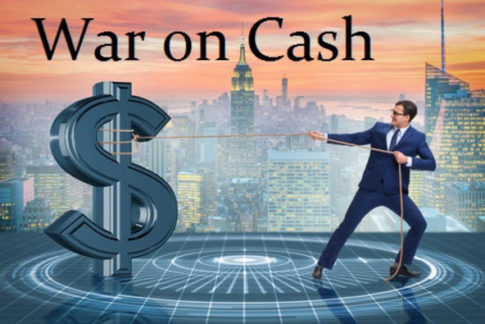 The war on cash is in full swing.

First we saw India’s Modi demonetize bank-notes in the interest of fighting corruption and tax avoidance in the black economy… later admitting that this will eventually lead to a cashless society.

Then we hear of a proposal now being whispered behind the curtain in Europe is to impose a tax on withdrawing your own money from an ATM. The banks support this measure as a whole because they see this as preventing bank runs.

And now the whispers behind the curtain are starting to get louder.

Following reports of some Aussie banks refusing to accept cash, Armstrong Economics’ Martin Armstrong warns the headlines in Australia demonstrate how the press is already conspiring against the people. The new slogan rising is Cash is for Criminals. ABC of Australia ran the story:

Cash is for criminals: Why we should scrap big notes

A massive stash of cash may sound like a good thing, but according to one US economist, the vast numbers of banknotes in circulation around the world are making us poorer and less safe.

Ken Rogoff, an economics professor at Harvard, has been writing about paper money for 20 years and he says much of this cash “is used to facilitate all sorts of crime”.

Beyond the more heinous crimes of human and drug trafficking and terrorism, some earners hoard their money to avoid tax.

One way for central banks to stimulate investment during a prolonged financial crisis is to apply negative interest rates.

Investments suddenly gone bad would spur a rush to convert capital into hard currency, decreasing the effectiveness of the interest rate drop (even leaving aside the problem of large amounts of money disappearing from the economy).

Nobody will look at the direction we are headed. I am deeply concerned that these type of proposals will send the West in a real revolution not much different from that of Russia in 1917. The divide between left and right is getting much deeper and the left is hell bent on stripping those who produce of their liberty and assets.

This type of confrontation is in line with our War Cycle, which we will update in 2017.

This is the most dangerous period we are heading into for governments will respond only to their own self-interest to survive. The socialists hate those who produce. That is just the bottom line. Nobody should have wealth more than they and this is the same human emotion that has cost tens of millions of lives in civil conflicts. We will review all our models and update this after the U.S. inauguration since the socialists are trying to figure out how to steal the election from Trump. There is no way to overturn Michigan, Wisconsin, and Pennsylvania without fraud. Otherwise, California is being used to justify handing the crown to Hillary despite the fact she conceded.

This will not end nicely. The divide will only get bigger. The future is anything but stable and safe.