While the detente between Russia and US president-elect Donald Trump could not have come at a more tense time, the Kremlin appears to be accelerating its head-on collision course with NATO, and as a highly placed defense official said on Monday, Moscow will deploy S-400 surface-to-air missiles and nuclear-capable Iskander systems in the exclave of Kaliningrad in retaliation for NATO deployments, confirming previous media reports of Russian intentions to once again blanket central Europe with potential nuclear ICBM coverage.

While Russia has previously said it periodically sends Iskanders to Kaliningrad, until now it has always said these were routine drills. Moscow has not linked the moves explicitly with what it says is a NATO military build-up on Russia’s western borders.

However, perhaps sensing that the Kremlin has a supportive voice in the White House, and thus negotiating leverage, Putin has decided to tip his cards diplomatically and alrt the world that Russia will escalate in what it sees a tit-for-tate game theoretical regime.

According to Reuters, after the election of Donald Trump, who has said he wants closer ties with the Kremlin and has questioned the cost of protecting NATO allies, some analysts predict an emboldened Moscow could become more assertive in eastern Europe. With recent military overtures in Syria and now Europe, this appears to be taking place.

Viktor Ozerov, chairman of the defense committee in the Federation Council, Russia’s upper house of parliament, said in remarks reported by RIA news agency that Russia was forced to react to the planned U.S. missile shield in eastern Europe.

“As response measures to such threats we will have… to deploy additional forces… This reinforcement includes deployment of S-400 and Iskander systems in Kaliningrad,” the Reuters quoted Ozerov as saying.

Additionally, Vladimir Putin also on Momday was quoted talking about how Russia has to respond to what it perceives as a threat from U.S.-led forces in eastern Europe.

“Why are we reacting to NATO expansion so emotionally? We are concerned by NATO’s decision making,” RIA quoted him as saying in an interview for a documentary that will be broadcast by Russian TV later on Monday.

“What should we do? We have, therefore, to take countermeasures, which means to target with our missile systems the facilities, that, in our opinion, start posing a threat to us,” Putin said. 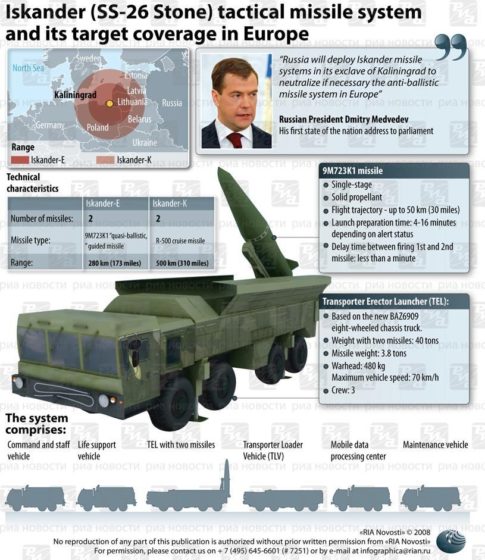