“This is an Amazing engine.” 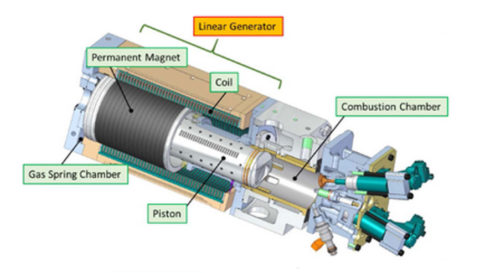 Toyota is hot on hydrogen fuel cells for its next-generation cars, but it’s not going cold on internal combustion just yet.

The company’s R&D division has developed a Free Piston Engine Linear Generator that can convert gasoline and other fuels into electricity more efficiently than existing systems.

It’s a technology that could lead to lighter, more efficient, better-packaged powertrains for plug-in hybrid cars.

Instead of connecting a separate generator to the crankcase of an internal combustion engine, the linear generator turns the piston itself into a generator, reducing the overall size and mechanical complexity of the machine.

Opposite the combustion end is a sealed chamber that acts as a gas spring to cycle the piston in lieu of the rotational action of a crank. In this case, a section of the piston is constructed of a magnetic material that interacts with coils in the walls of the chamber to generate electricity.

You can watch an animation of how it works here.

The motor operates on a two-stroke cycle, with intake valves located in the sides of the chamber at the bottom of its travel and an exhaust valve at the end adjacent to the spark plug. Several small units could be grouped together to increase power and cancel out any vibrations.

But don’t leave hydrogen out of this equation, either. Since it relies on an air spring, the compression ratio of the generator can be adjusted to accommodate just about any combustible fuel.

Toyota has not said when the Free Piston Linear Generator might be ready for production.