While Caterpillar’s CEO may have resigned recently, admitting that he misjudged the business strategy, the stock does not appear to be bothered, soaring by 15% since the Trump victory on hopes an infrastructure push would make excavators great again. For now, however, the woes at the heavy industrial manufacturer continue, with yet another month of declining global sales, the company’s 47th in a row.

To be sure, there was a glimmer of hope for CAT coming out of Asia, where retail sales continued the rebound after posting positive gains in the August and September, rising 12% in October, the biggest annual gain since September 2012. This however was offset by continuing declines in North America, the EAME and Latin Ameica regions, which declined by 16%, 14% and 24% respectively. 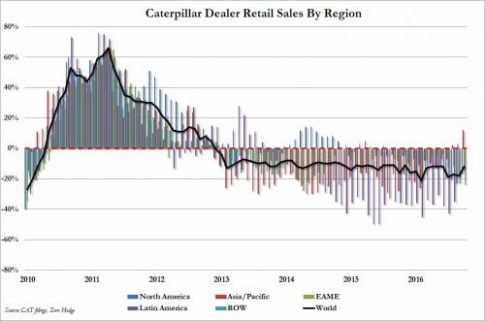 Following the latest, October, double-digit decline in worldwide sales, which dopped by 12% following the September 18% slide, CAT has not recorded a positive growth month for nearly 4 straight years, or 47 consecutive months. 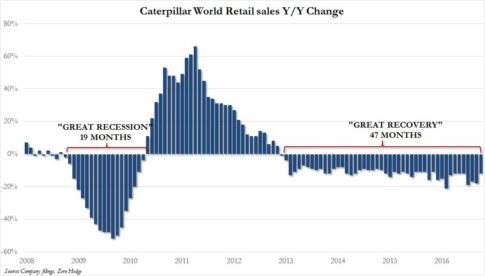