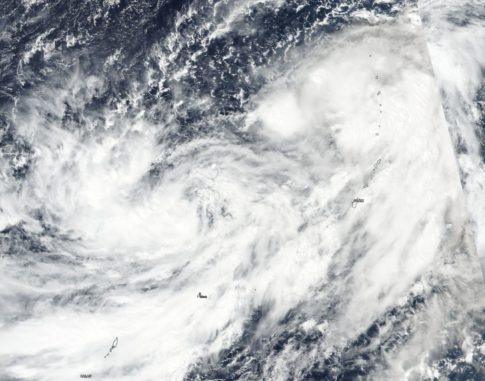 Two tropical systems are currently lurking in the Northwest Pacific, north of Yap. One of them, now known as the Tropical Storm “Meari” will continue intensifying over the next three days and may threaten the Phillippines over the coming weekend, while the impact of the second system is still unknown.

“Back in 2013 I recall the Philippines being devastated by two consecutive typhoons, following the uprising when the US wanted to reopen Clark AFB (previously closed due to volcanic dust).

At that time weather/seismic/HAARP watcher, Michael Janitch (Dutchsinse.com) posted that there were two distinct microwave pulse beams focused on the exact formation spots of both typhoons one day before they formed, and extrapolated the generation spot by triangulation to a US military establishment on an island between Japan & Alaska.

The result was the devastation from both typhoons forced the Philippine Gov to plead for emergency help, enabling the US to sneakily re-establish themselves.

Today, we have a Philippine leader again openly hostile to US hegemony & interference, causing much disquiet in US Government circles as US/CIA needs Philippines from which to launch any challenges to China. So he must be taught a lesson, mustn’t he?

Cue, HAARP. Seems two more typhoons are lurking near the Philippines yet again, to entice their leader to be more receptive to the American benevolence.