Europe is currently seeing the reintroduction of blasphemy laws through both the front and back doors. In Britain, the gymnast Louis Smith has just been suspended for two months by British Gymnastics. This 27-year old sportsman’s career has been put on hold, and potentially ruined, not because of anything to do with athletics but because of something to do with Islam.

Last month a video emerged online of the four-time Olympic medal-winner and a friend getting up to drunken antics after a wedding. The video — taken on Smith’s phone in the early hours of the morning — showed a friend taking a rug off a wall and doing an imitation of Islamic prayer rituals. When the video from Smith’s phone ended up in the hands of a newspaper, there was an immediate investigation, press castigation and public humiliation for the young athlete. Smith — who is himself of mixed race — was forced to parade on daytime television in Britain and deny that he is a racist, bigot or xenophobe. Notoriously liberal figures from the UK media queued up to berate him for getting drunk or for even thinking of taking part in any mockery of religion. This in a country in which Monty Python’s Life of Brian is regularly voted the nation’s favourite comic movie.

After an “investigation,” the British sports authority has now deemed Smith’s behaviour to warrant a removal of funding and a two-month ban from sport. This is the re-entry of blasphemy laws through the back door, where newspapers, daytime chat-shows and sports authorities decide between them that one religion is worthy of particular protection. They do so because they take the religion of Islam uniquely on its own estimation and believe, as well as fear, the warnings of the Islamic blasphemy-police worldwide.

The front-door reintroduction of blasphemy laws, meantime, is being initiated in a country which once prided itself on being among the first in the world to throw off clerical intrusion into politics. The Dutch politician Geert Wilders has been put on trial before. In 2010 he was tried in the courts for the contents of his film “Fitna” as well as a number of articles. The trial collapsed after one of the expert witnesses — the late, great Dutch scholar of Islam, Hans Jansen — revealed that a judge in the case had tried in private to influence him to change his testimony. The trial was transparently rigged and made Dutch justice look like that of a tin-pot dictatorship rather than one of the world’s most developed democracies. The trial was rescheduled and, after considerable legal wrangling, Wilders was eventually found “not guilty” of a non-crime in 2011.

But it seems that the Dutch legal system, like the Mounties, is intent on always getting its man. On Monday of this week the latest trial of Geert Wilders got underway in Holland. This time Wilders is being tried because of a statement at a rally in front of his supporters in March 2014. Ahead of municipal elections, and following reports of a disproportionate amount of crimes being committed in Holland by Muslims of Moroccan origin, Wilders asked a crowd, “Do you want more or fewer Moroccans in this city and in the Netherlands?” The audience responded, “Fewer, fewer.” To which Wilders responded, “Well, we’ll arrange that, then.” 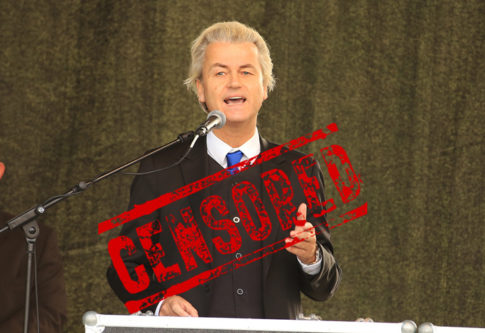 By prosecuting Dutch member of parliament Geert Wilders for making “politcially incorrect” statements, Dutch courts are behaving like a religious court. They are trying to regulate public expression and opinion when it comes to the followers of one religion. (Source of Wilders photo: Flickr/Metropolico)

Opinion polls suggest that around half the Dutch public want fewer Moroccans in the Netherlands and many opinion polls going back decades suggest that the Dutch people want less immigration in general. So at the very least Wilders is being put on trial for voicing an opinion which is far from fringe. The long-term implications for Dutch democracy of criminalizing a majority opinion are catastrophic. But the trial of Wilders is also a nakedly political move.

Whether or not one feels any support for Wilders’s sentiments is not in fact the point in this case. The point is that by prosecuting someone for saying what he said, the courts in Holland are effectively ruling that there is only one correct answer to the question Wilders asked. They are saying that if someone asks you whether you would like more Moroccans or fewer, people must always answer “more,” or they will be committing a crime. What kind of way is that to order a public debate on immigration or anything else? People may say, “He wouldn’t be allowed to say that about any other group of people.” And Wilders himself may not say that about any group of people, because he has his own political views and his own interpretation of the problems facing his country.

It is worth trying a thought-experiment: If Wilders or any other politician got up and asked a crowd “Do you want more or fewer British people in Holland,” I may not — as a British person — feel terribly pleased with him for asking the question, or terribly happy with the crowd if they chanted “Fewer.” Although if British expats in Holland were responsible for a disproportionate amount of crime and disorder in the country, some mitigating sympathy for the sentiment may be forthcoming. But at no point would it occur to me that anyone saying he did not want an endless flow of British people coming into the Netherlands should be prosecuted. Nor would he be.

Like the behaviour of the British Gymnastics association, the Dutch courts are behaving like a religious court. They are trying to regulate public expression and opinion when it comes to the followers of one religion. In so doing, they obviously aspire to keep the peace in the short term, but they cannot possibly realise what trouble they are storing up for our future.