The latest allegation of potential impropriety and conflict of interest involving the Democratic Party and the FBI, which over the summer famously cleared Hillary Clinton of any criminal wrongdoing as relates to her personal email server, comes not from a Podesta email or a Wikileaks disclosure, but the WSJ which overnight reported that the political organization of Virginia Govenor Terry McAuliffe, an influential Democrat with longstanding ties to Bill and Hillary Clinton, gave nearly $500,000 to the election campaign of the wife of an official at the Federal Bureau of Investigation who later helped oversee the investigation into Mrs. Clinton’s email use. 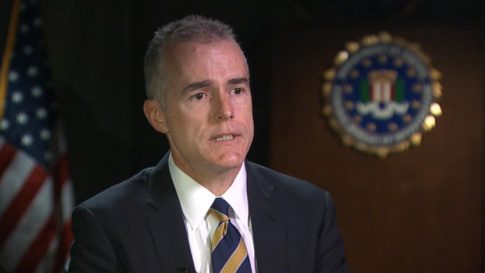 McAuliffe was prominently featured here most recently for his August decision to restore the voting rights of some 13,000 West Virginia ex-felons, an effort he was expected to continue until the voting rights for all 200,000 ex-criminals have been restored.

The WSJ adds that the Virginia Democratic Party, over which Mr. McAuliffe exerts considerable control, donated an additional $207,788 worth of support to Dr. McCabe’s campaign in the form of mailers, according to the records. That adds up to slightly more than $675,000 to her candidacy from entities either directly under Mr. McAuliffe’s control or strongly influenced by him. The figure represents more than a third of all the campaign funds Dr. McCabe raised in the effort.

Despite the boost in funding, after McAuliffe and other state party leaders recruited Dr. McCabe to run, she lost the election to incumbent Republican Dick Black.

A spokesman for the governor said he “supported Jill McCabe because he believed she would be a good state senator. This is a customary practice for Virginia governors… Any insinuation that his support was tied to anything other than his desire to elect candidates who would help pass his agenda is ridiculous.”

Seeking to clear away any speculation of impropriety and conflicts of interest , the FBI said in a statement that during his wife’s campaign Mr. McCabe “played no role, attended no events, and did not participate in fundraising or support of any kind. Months after the completion of her campaign, then-Associate Deputy Director McCabe was promoted to Deputy, where, in that position, he assumed for the first time, an oversight role in the investigation into Secretary Clinton’s emails.”

FBI officials said that after that meeting with the governor in Richmond on March 7, Mr. McCabe sought ethics advice from the bureau and followed it, avoiding involvement with public corruption cases in Virginia, and avoiding any campaign activity or events.

Mr. McCabe’s supervision of the Clinton email case in 2016 wasn’t seen as a conflict or an ethics issue because his wife’s campaign was over by then and Mr. McAuliffe wasn’t part of the email probe, officials said.

Of course, despite the prompt denial that this fund transfer was not out of the ordinary, the money was not refunded and will serve as the latest suggestion that “pay-to-play” is alive and well, and involves not just the judicial branch, but also the supposedly impartial FBI.

As the WSJ also notes, McCabe is a longtime FBI official who focused much of his career on terrorism. His wife is a hospital physician who campaigned in northern Virginia, where the couple live with their children. The 2015 Virginia State senate race was Dr. McCabe’s first run for office and her campaign spent $1.8 million. The race was part of Mr. McAuliffe’s failed effort to win a Democratic majority in the Virginia legislature, which would have given him significantly more sway in Richmond, the state capital.

Mr. McAuliffe has been a central figure in the Clintons’ political careers for decades. In the 1990s, he was Bill Clinton’s chief fundraiser and he remains one of the couple’s closest allies and public boosters. Mrs. Clinton appeared with him in northern Virginia in 2015 as he sought to increase the number of Democrats in the state legislature.

Dr. McCabe announced her candidacy in March 2015, the same month it was revealed that Mrs. Clinton had used a private server as secretary of state to send and receive government emails, a disclosure that prompted the FBI investigation.

At the time the Clinton probe was launched in July 2015, McCabe was running the FBI’s Washington, D.C., field office, which provided personnel and resources to the Clinton email probe.

At the end of July 2015, Mr. McCabe was promoted to FBI headquarters and assumed the No. 3 position at the agency. In February 2016, he became FBI Director James Comey’s second-in-command. As deputy director, Mr. McCabe was part of the executive leadership team overseeing the Clinton email investigation, though FBI officials say any final decisions on that probe were made by Mr. Comey, who served as a high-ranking Justice Department official in the administration of George W. Bush.

The paper concludes that “it was unclear the extent to which Mr. McCabe may have recused himself from discussions involving Mr. McAuliffe. When Mr. McCabe’s wife began her campaign, he shied away from involvement in Virginia public corruption cases, according to officials.” He was, however, instrument in supervising Hillary’s investigation the subsequently clearing her.

The punchline: “once the campaign was over, officials said, Mr. McCabe and FBI officials felt the potential conflict-of-interest issues ended.“