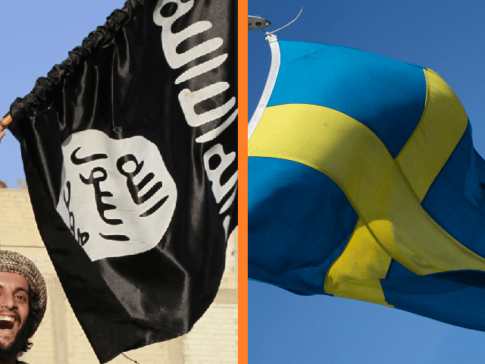 Swedish prosecutors have effectively legalised the display and use of the Islamic State (ISIS) battle flag by refusing to prosecute a Muslim male who used an image of it as his Facebook profile.

An unidentified 23-year-old was the subject of a complaint to police after he set an image of the ISIS flag as his profile picture. Swedish police passed the case onto the prosecutor who after deliberation decided to not pursue it.

Whether the Islamic State flag is a symbol of hatred akin to the German National Socialist Swastika has never been tried in court — and may now never be after the decision by prosecutor Gisela Sjövall.

The decision rests upon the wording of Swedish law, which is designed to protect minorities from racial or other hatred. Because Ms. Sjövall believes the Islamic State hates everyone, no particular minority group has been offended and therefore no offence has been committed.

“You could say that merely waving a flag of IS in the current situation can not be considered hate speech. It is not an expression of disrespect towards any [particular] ethnic group.

“IS expresses every kind of disrespect, but it’s against everyone except those who belong to IS itself. There is the dilemma, it [offends] too big a group.

“It has been said there could possibly be some form of incitement, that is urges others to commit criminal acts such as murder, but that is not the case”.

She told the newspaper the Swastika had been definitely linked to Anti-Semitism, but it could take ten years for the Islamic State flag to be linked to any kind of hate in Swedish law.

The man caught up in the case denied being a supporter of the Islamic State, and claimed the flag was actually an ancient device of Islam which has recently been “abused” by the Islamic State.