Moments ago, Wikileaks just released its third data dump from the hacked email account of Hillary Clinton’s Campaign Chair, John Podesta, which is becoming a true headache for Hillary Clinton and her supporter base.

There are as many as 1,190 new emails in the latest release, adding to the more than 4,000 emails from Podesta already released by the whistleblowing website, and bringing the total to 5,336. Wikileaks founder Julian Assange has claimed he is sitting on as much as 50,000 messages.

Among the email chains included in in the release is an email chain from February 15, 2016 titled ‘Pushback on immigration,’ which shows a request for Ken Salazar, who was the US secretary of the interior from 2009 to 2013, to write an op-ed to smear Bernie Sanders’ “professed support for immigration.”

The emails also reveal frustration from Clinton’s camp over President Obama’s reluctance to show support for her. Dated March 12, 2016, over a month after primaries began, advisor Neera Tanden asks Podesta “Can Obama even hint of support of Hillary before Tuesday? Really, just a directional nod would be helpful.”

“Maybe they don’t want to do this, but the stakes are pretty damn high in this election for him,” Tanden says. Podesta asks “Why don’t you push Valerie a little bit,” possibly referencing Valerie Jarrett, senior advisor to Obama.

“Guidance?” Siewert wrote to Podesta and Palmieri, attaching Dorning’s inquiry. “I can make stuff up but happy to emphasize whatever you’d like. Was thinking of stressing the deep knowledge and expertise around executive power and what can be done independent of congressional action.”

In the previous release, we learned that some Hillary advisers pushed for Bill’s role in his wife’s campaign for presidency to be reduced, as his “sex life could be damaging to her”.

Clinton has confirmed the authenticity of the hacked emails, clarifying comments exposed by the leak during Sunday’s second presidential debate. Her admission to the National Multi-Housing Council in 2013 that politicians have “both a private position and a public position” was explained as being a discussion she had regarding the film ‘Lincoln’.

While we are going through the latest document dump, as usual, we urge readers to flag and point us to any of the more notable emails, starting with yet another beauty from CNBC’s own “unbiased” political commentator John Harwood emailed to Hillary’s campaign chairman, John Podesta. 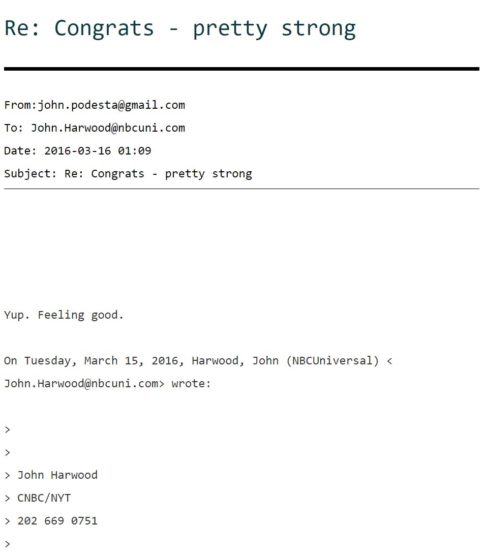