TPTB who engineered the migrant crisis, just before the (engineered) collapse of the financial system, know exactly what will happen, when the system collapses and what those migrants will do when they will receive no more money from the state (and no food) and that is why they brought them in in the first place. 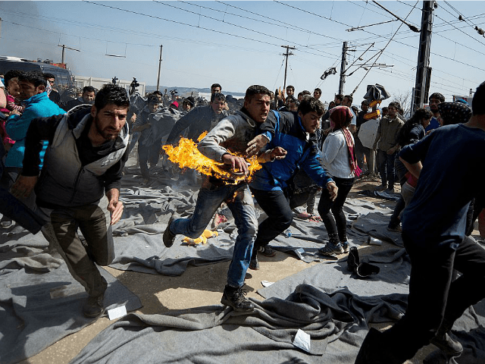 Speaking on Kossuth Radio, the intelligence expert says that following the country’s referendum in which 98.5 per cent of voters rejected Brussels’s plans for mandatory migrant quotas he expects to see a “serious attack” on Hungary from three directions.

“One of them will be a formal political attack from Brussels, another one an informal attack with the help of the mainstream media, which will be a significant portion of the Western media outlets, but also the local media which are financed from outside of Hungary.”

The security expert says the third prong in the offensive is a “concrete attack” on the country’s borders, in which “civilian organisations” mobilise migrants to the Hungarian border.

Mr. Foldi highlights how hundreds of migrants suddenly set off from Serbia to Hungary holding signs written in English and chanting demands for open borders following the referendum this week.

A television crew learned, before the migrant crowds left, that unidentified groups of Europeans had made a number of visits to Serbia’s camps to tell migrants Hungary’s borders will open after the vote, allowing them to enter Western Europe.

The spreading of such “outrageous lies”, Foldi asserts, are “not a random occurrence”. He reports that the episode is just the latest in a pattern of so-called humanitarian groups spreading false information to mobilise migrants.

These organisations, Foldi argues, serve a dual purpose of promoting open borders activism as model behaviour. Depicted by the media as humanitarians, and their actions pushed as being morally “correct”, he says this “has an effect on the average citizen, who is taken in by it”.

The intelligence expert points out that spreading disinformation so as to rally crowds of migrants towards European borders is not actually a humanitarian thing to do, and more resembles a direct attack on state policy.

He asks: “Because would it not be more humane for the people who arrived in Belgrade — illegally, I might add, without any travel documents and visas — to suggest that they visit the Hungarian consulate there and ask for a visa.”

Questioning why a so-called humanitarian organisation would want to move migrant masses to the Hungarian border, Mr. Foldi says they are acting as part of a “well-established system, built years ago”.

“What we seeing every day here is a fourth generation military operation against Europe. Not using traditional weaponry to enforce a strategy, but using economic and social infrastructure, and one element of that is the actions carried out by civilian humanitarian organisations,” he explains.

Mr. Foldi says Brussels directs “formal political attacks” on his nation’s migrant policies because they “want to kill off at the roots any rebellious attitude, which is represented by Hungary, against a strategy they planned well ahead”.

Stating that Brussels’s goal “is to convert Europe into a multicultural system, a system which is above nations”, Mr. Foldi argues that the EU is forcefully attacking Hungary because the country has taken concrete action to protect itself from being forced into multiculturalism.

He stated: “This invasion is driven, on the one hand, by people smugglers, and on the other by those [human rights] activists who support everything that weakens the nation-state. This Western mindset and this activist network are perhaps best represented by George Soros.”

Hungarian billionaire George Soros has admitted involvement in the crisis which saw over a million migrants enter the continent last year.