A massive manhunt was underway in the German city of Chemnitz, the third largest city in Saxony, and the town was on lock down as local police seek a terror suspect. German police said two people were detained on Saturday as part of the manhunt for a Syrian-born man suspected of planning an airport bomb attack, adding that they had found explosives in an apartment they raided earlier.

The Saxony police earlier said they discovered “highly sensitive explosives” in the apartment of the suspected blast plotter, according to their official Twitter. This is third major German terror event since mid-July involving a refugee or asylum seeker.

Currently running a large-scale operation in #Chemnitz because of the suspicion of a planned bomb attack.

The police advised residents within the locked down area to stay in their homes:

Within the locked area please stay in your homes and follow the instructions of the police (here and on site).

The police did not say if the two people detained included Jaber Albakr, 22, the man suspected of planning the attack. “Highly charged explosives were found in the apartment concerned in Chemnitz,” Saxony police said on Twitter, adding that they needed to evacuate more people from the residential area of the eastern city as a precaution. 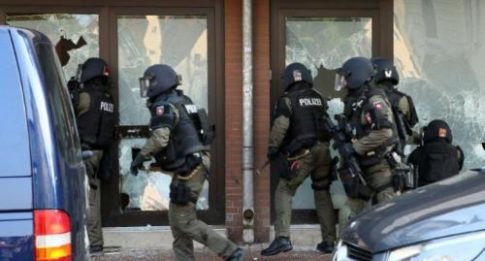 Earlier on Saturday, a large scale security operation was launched after police received intelligence about a terror plot being planned in the city on Friday night, according to police.

Authorities released a photo of Jaber Albakr, the alleged suspect, wearing a hooded sweatshirt and said he was last seen wearing similar clothes. 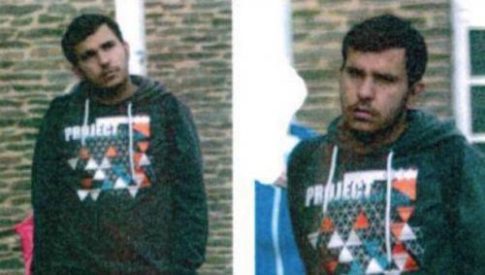 “We have to assume that the person is dangerous,” an official representative of the Saxony police, Tom Bernhardt, said in a statement on Saturday.

The spokesman said it is yet unclear whether the wanted man had come to Germany as a refugee. The suspect is believed to be connected to Islamic extremist groups, according to dpa news agency’s security sources. But police only confirmed he was “known”‘ to German intelligence.

Chemnitz’s central train station was temporarily closed for the manhunt. Two people were detained, and their luggage is being examined, police said.

The police said the possible blast was averted, and that force was used to enter the suspicious apartment. “The explosion heard was an access measure by the police. A relevant person could not be found,” law enforcers tweeted amidst the operation.

The German state of Saxony has been the target for a number of explosions. Two improvised bombs went off in the city of Dresden less than two weeks ago that targeted a mosque and an international conference center. No one was injured, according to police, although the mosque was severely damaged.