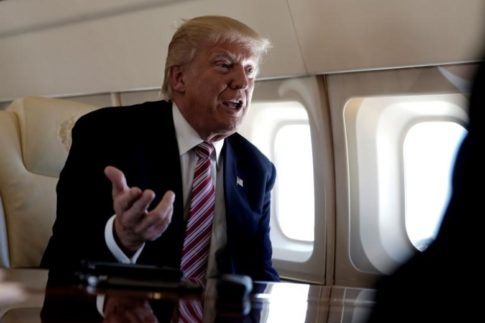 – Trump Slams Yellen: The Fed Has Created A “Stock Bubble” And “A False Economy” To Boost Obama:

One month ago, Donald Trump urged his followers to sell stocks, warning of “very scary scenarios” for investors, and accused the Fed of setting the stage for the next market crash when he said that “interest rates are artificially low” during a phone interview with Fox Business. “The only reason the stock market is where it is is because you get free money.”

Earlier today, speaking to a reporter traveling on his plane who asked Trump about a potential rate hike by the Fed in September, Trump took his vendetta to the next level, saying that the Fed is “keeping the rates artificially low so the economy doesn’t go down so that Obama can say that he did a good job. They’re keeping the rates artificially low so that Obama can go out and play golf in January and say that he did a good job. It’s a very false economy. We have a bad economy, everybody understands that but it’s a false economy. The only reason the rates are low is so that he can leave office and he can say, ‘See I told you.'”

He then lashed out at Yellen, whom he accused of having a political mandate when conducting monetary policy: “So far, I think she’s done a political job. You understand that.”

His conclusion: “At some point the rates are going to have to change.”

Indeed they will, and that’s precisely what almost every bank, from Goldman yesterday to Citi today, and many others inbetween, have been warning about in recent months.

Until recently, Trump’s latest anti-Fed outburst would have been swept under the rug as just another example of the deranged ramblings of an anti-Fed conspiracy theorist (trust us, we’ve been there). However, considering the spike in anti-Fed commentary in recent weeks coming from prominent, and established institutional sellside analysts all the way to the WSJ, it may be that Trump was once again simply saying what everyone else thought but dared not mention.

2 thoughts on “Trump Slams Yellen: The Fed Has Created A “Stock Bubble” And “A False Economy” To Boost Obama”