“Hmmm!
Nothing in the Mainstream Media again!” 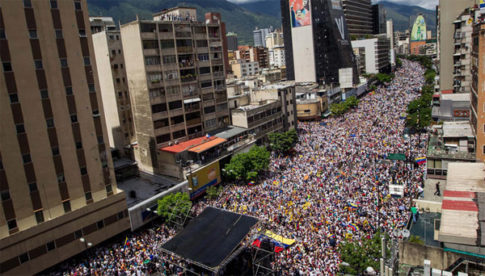 At least 1 million Venezuelans marched Thursday in the capital, Caracas, to demand a recall vote against President Nicolas Maduro in what the opposition described as the “largest mobilization in decades”.

Protesters marched for 18 kilometers (11 miles) and occupied three main streets of the city during the protest that was called three weeks ago by opposition coalition parties in the Democratic Unity Table (MUD).

Maduro tried to downplay the numbers saying there were between 25,000 to 30,000 participants.

“Today we defeated an attempted coup that aimed to fill with violence and death Venezuela and Caracas,” he said.

Government supporters also took to the streets dressed in red t-shirts and caps to support the president.

The government is struggling to contain severe social, political and economic crises that have been aggravated by the fall of the oil prices.

Demonstrations went on without any major incidents but near the end of the protests a group of masked men threw stones and blocked a strategic road connecting the east with the west of the city, prompting police to respond by using tear gas.

The opposition on Wednesday began a new wave of mobilizations in the streets to force the National Electoral Council (CNE) to set a date for the collection of the 4 million signatures needed to ask for a recall vote. The next protests are set for Sept. 7 and 14.

The Venezuelan opposition is running out of time to dismiss the Maduro administration. If the revoke takes place before Jan. 10 and Maduro loses, Venezuelans will return to the polls to elect a new president.

But, according to the Constitution, if Maduro loses the vote after that date, he could select a vice president to lead the country.