Submitted by Maria Polizoidou via The Gatestone Institute,

In coalmines, from 1911 to 1986, canaries operated as an early warning system for the leakage of hazardous gases. Whenever the birds showed signs of distress, the miners knew trouble was coming.

Greece has deep problems. Greece is presently in the “coalmine” of an endless economic and immigration crisis.

This month, for the first time, there was a request to activate an anti-racist law, passed in September 2014, against a Greek citizen who also has institutional status.

The coalition government of Alexis Tsipras (SYRIZA) and Panos Kammenos (Independent Greeks) asked the district attorney to prosecute the Bishop of Chios Island, Markos Vasilakis, because he dared to say, during a sermon, that the thousands of people who recently arrived from Turkey on the island of Chios are illegal migrants, and not Syrian refugees.

Chios, the fifth-largest island of Greece, is only 3.5 nautical miles from Turkey, and therefore offers an opportunity to migrants and refugees to cross from Turkey into the European Union.

Chios is also one of a few Greek islands that has received the largest waves of migrants. Its population of 51,320 inhabitants now accommodates, according to the latest official data, 3,078 migrants, with more on the way.

It seems the government coalition, through the Secretary of Human Rights, has decided that the solution of Greece’s migrant/refugee problem will come if the Bishop of Chios Island is prosecuted for incitement to racial hatred, and if the constitutional right of Greek citizens to freedom of speech is overturned. Secretary of Human Rights Kostas Papaioannou asked the district attorney to prosecute Bishop Markos for these specific charges.

Is Bishop Markos Vasilakis a Greek Orthodox fanatic or a neo-Nazi? Did the church close its doors to refugees and migrants? Did the bishop try to turn the population of Chios against anyone?

Not at all. Bishop Markos is highly educated, with a PhD in Byzantine Philology from the Philosophical and Theological School of Athens University. Since the beginning of the migrant crisis, according to the residents of Chios, Bishop Markos opened all the island’s churches to accommodate the refugees and illegal migrants. Under his command, all the available spaces on the island were given to caring for whoever left his homeland and home. He has fought hard to collect clothing, shoes and food for refugees and illegal migrants. His work speaks for itself.

If Bishop Markos were such a horrible person, why did Prime Minister Alexis Tsipras met him in his office in November 2015 to discuss the migrant crisis and never express any dissatisfaction him?

What, then, did Bishop Markos do to infuriate the Greek government to such an extent that they turned on him?

Bishop Markos spoke the truth. He said that the people arriving in Greece were not refugees but illegal migrants. 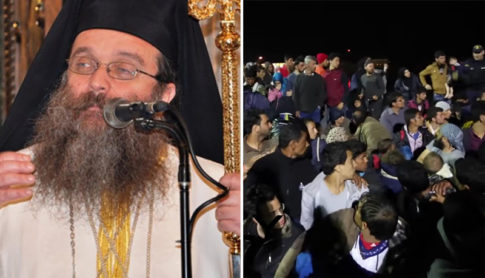 Left: The Bishop of the Greek island of Chios, Markos Vasilakis, is being prosecuted for incitement to racial hatred, because he correctly observed that most of the migrants arriving in Greece from Turkey were not refugees but illegal migrants. Right: Migrants occupying the port of Chios in April 2016.

If it is a “racist crime” for a citizen to express accurately the percentages of refugees and illegal migrants entering the country, what will come next, the Thought Police?

The real reason for prosecuting Bishop Markos, it seems, at least according to members of the opposition, is that the government expects that Turkey’s migration deal with the EU will collapse, and that if it does, the migrant flows in the coming months will increase dramatically. The government, according to some members in the opposition, has no friendly way to manage illegal migration and therefore prefers to impose restrictions on freedom of speech and prosecute anyone who objects. Tsipras’s government is leftist; the ideology and the official policy of the SYRIZA party is that of open borders for illegal migrants who wish to settle in Greece.

Church groups in Greece believe that the government is targeting the Church in an attempt to change the country’s Christian foundation and lead the society into a non-Christian era. The SYRIZA party was always “Christianophobic.” Its members do not even enter Christian churches. When a notable priest is giving to migrants and being so unjustly prosecuted, the Greek Orthodox Church cannot help wondering about the government’s real intentions on the issue of migrants and refugees.

If Bishop Markos is the canary of freedom of speech, then, as many observers believe, the prosecution of people who have a view on migrant/refugee policy that differs from SYRIZA’s will continue.

If the government believes that prosecuting whoever objects will scare them into silence, as members of the opposition claim, the government is making a big mistake. The government might scare the Bishop of Chios Island by pressing charges against him and trying to stigmatize him as a racist. The government forced him to publish a press release claiming that for him, all people are created in the image of God and that all he had explained to his congregation was the legal difference between refugees and illegal migrants.

But the government will still not scare the angry majority of Greeks.

In a country suffering seven years of economic downturn, and where each municipality will have to accommodate 1,000 migrants, whether it wants to or not; in a country that sees on the news migrants fight each other, the natives and the police; in a country that has 61 cases of malaria and 12 municipalities already in quarantine because of the migration problem, according to the Health Ministry, and where gun sales increase day by day — the last thing we need is to abolish the constitutional rights of citizens. Violence and social unrest will then be the next stage in a drama that will have a bad end.

In Greece — the “coalmine” of the Eurozone — the canary seems to have died. If this is the beginning of a methodical abolition of constitutional rights such as freedom of speech, Greece could turn into a Turkish style of democracy — like that of Erdogan, which he seems hell-bent on turning into an Islamic caliphate. What a very sad fate that would be for Greece, the nation which gave birth to democracy.