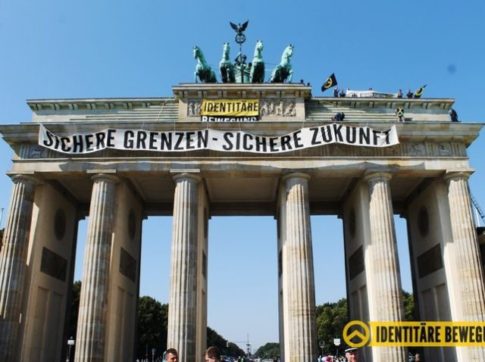 The hipster-right Identitarians accomplished perhaps their biggest and most spectacular protest in Germany Saturday, unfurling a banner on Berlin’s iconic Brandenburg gate that read, “secure borders, secure future.” The group managed to scale the landmark on Saturday afternoon and claim that they did so to protest the Federal government of Angela Merkel. They say that the protest coincided with an event put on by the government to focus on migration and integration.

According to their Facebook page the Identitarians say that the protest was to make the average German aware that Merkel and her government were clearly breaking German laws and that the migration crisis policies were an utter failure. The group spoke of the many migrants the German government was forced to admit they had no idea where they were and highlighted the recent terror attacks in Bavaria saying that the policies of a “multicultural utopia”   were leading to a rapidly fragmented society.

The slogan “secure borders, secure future,” they said represents their desire to see a “fortress Europe” that can withstand and turn back the waves of migrants flooding into Europe and Germany. Since the start of the migrant crisis the Identitarians have called on European governments in multiple countries to secure their borders against mass migration, something that governments like Germany resisted claiming that upholding the European Union’s Schengen free movement agreement was more important.

Finally the group gave a signal to the youth of Europe who may also be  weary of the mass migration policies of the establishment calling for them to defend themselves through peaceful action against mass migration, increasing Islamisation and governments who they say break the rules and the laws whenever it suits them.

The Identitarian movement in Germany has been gaining momentum over the past few months and staging more elaborate and spectacular protests in the same vein as their Austrian and French counterparts. Earlier this month the German domestic intelligence service confirmed that they were monitoring the group due to the rise in their activities. Many say that their protest of the ex-stasi agent led pro-censorship Amadeu Antonio foundation was the catalyst for the government to start looking more critically at the group as the Austrian intelligence service does in Austria.

In Austria the group has become far more famous in the mainstream media after a march they held for the victims of terrorism was attacked by violent left wing extremists. The attacks led to one supporter of the group from Germany almost dying on the street after far left extremists threw bricks at the protesters from the roof of a nearby building.