Turkish tanks crossed the border into northern Syria Wednesday as part of “operations to clear ISIS terrorists “from the city of Jarabulus and to protect Turkey from the Islamic State and Kurds, Anadolu News Agency reported.

According to media reports, even more armored reinforcements have been dispatched to Gaziantep near the Turkey Syria border, including at least 80 Leopard tanks.

The invasion followed hours after the Turkish prime minister’s office announced that the Turkish military and the U.S.-backed coalition forces have launched an operation called “Euphrates Shield” to clear a Syrian border town from Islamic State militants. 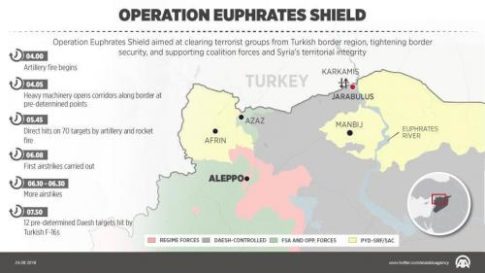 The assault on ISIS held Jarablus has been defined as follows:

Anadolu adds that Free Syrian Army members are about to reach the village of Kaklijah, some three kilometers inside the Syrian border. The tank incursion followed the Turkish Armed Forces hitting 81 targets in northern Syria 294 times with rockets starting at 4.00 a.m. (0230 GMT) early Wednesday, the sources added.

The Turkish Air Forces carried out an operation “on identified targets” with F-16 fighter jets in Jarabulus, Aleppo as well as the nearby village of Kaklijah, the sources added.

“At 4:00 this morning, operations started in the north of Syria against terror groups which constantly threaten our country, like Daesh [Arabic name for Islamic State] and the PYD [he Democratic Union Party of Syria],” Recep Tayyip Erdogan said in a speech in Ankara. 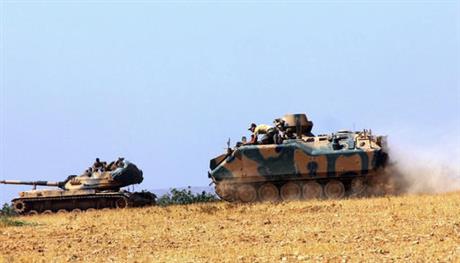 Erdogan said that the incursion had been prompted by cross-border attacks originating from Jarablus, stressing they “must stop,” according to Turkish state news agency Anadolu.

Turkish media reported earlier that IS had launched retaliation attacks into the Turkish border town of Karkamis after the violence around Jarablus escalated. The Turkish operation is focused on the Kurdish border town of Jarablus, which has been held by the Islamic State terrorist group since July of 2013.

The operation, called Euphrates Shield, is being supported by Turkish air forces, as well as warplanes from the US-led coalition.

Turkish artillery began shelling targets across the Syrian border earlier on Wednesday, Reuters reported, citing its own journalist on the scene. The agency said Turkish tanks can now be seen inside Syria and an intensive bombardment can be heard.

Earlier, the Prime Ministry said the operation launched early Wednesday by the Turkish military and the U.S.-led coalition warplanes aimed to free the IS-held town of Jarablus, Anadolu reported.

The operation, which began at around 4 a.m. local time (0100 GMT), is aimed at clearing the Turkish borders of terrorist groups, helping to enhance border security and supporting the territorial integrity of Syria, they said.

Preventing a new flow of migrants and delivering aid to the region’s civilian population in need are also among the goals, officials added.  The move comes after a series of mortar bombs landed in a residential Turkish area along the Syrian border beginning Tuesday morning, security sources said.

There were no injuries in Karkamis, which lies approximately 1 kilometer across the frontier from Jarabulus — part of Aleppo governorate — where Free Syrian Army forces are fighting to take control of the city from Daesh.

Operations of Turkish Armed Forces, which has been actively fighting Daesh, have significantly contributed to ongoing efforts of U.S.-backed international coalition against the terror group.