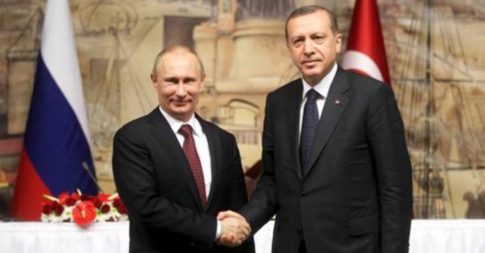 – Did Turkish President Erdogan Just Use a False Flag to Justify Invading Syria?:

On Sunday Turkey experienced its deadliest terrorist attack this year. A suspected child suicide bomber struck a wedding celebration in the Turkish city of Gaziantep, killing at least 54 people and injuring dozens more.

Turkish President Recep Tayyip Erdogan immediately blamed ISIS for the attack. This reaction is especially peculiar given the fact his policies have directly contributed to the growth of ISIS in more ways than one. His government is reportedly providing ISIS fighters with passage through Turkey, weapons, and medical assistance, to name a few examples.

So let’s do a little bit more digging.

According to one Turkish Member of Parliament, Mahmut Togrul, the targets of Sunday’s attack in Turkey were predominantly supporters of the pro-Kurdish People’s Democratic Party (HDP). It is true that ISIS has been battling the Kurds for some time now. However, the Kurds — specifically the HDP — have another powerful enemy.

As the Telegraph reported in 2015, the biggest threat to Turkey’s president obtaining unilateral control of the country during the 2015 elections was the HDP. In an article entitled “How Erdogan Enabled ISIS To Attack The Turks,” The Huffington Post reported in June of this year that the HDP won enough votes in June of 2015 was enough to “derail Erdogan’s plan to create a powerful presidential system that would benefit the Turkish leader and his family.” The HDP did so well that their success would deny Erdogan’s political party a majority for the first time in more than a decade.

The threat the Kurdish movement poses to Erdogan’s control of Turkey is further demonstrated by his policy of heavily bombing Kurdish territory in Syria, despite the fact that Washington regards the Kurds as the most effective fighting force against ISIS. As noted by the Huffington Post, Erdogan would regularly link the HDP to the fighting force known as the Kurdistan Workers’ Party (PKK), regarded by some as terrorists.

Erdogan then blamed the subsequent terrorist attacks that occurred late last year and earlier this year on the Kurds, despite the fact that they in turn denied responsibility.

Even at the time of this article’s publishing, ISIS’ responsibility for the wedding attack has still not been confirmed. This is illustrated by CNN’s reliance on Turkey-based journalist Andrew Finkel. As CNN reported:

“He said there were a number of reasons the Sunni terror group – if it is responsible for the attack – could have been motivated to strike Kurdish targets.”

To date, the only person convinced of ISIS involvement is Erdogan himself. When corporate media has to quote an official to infer someone’s responsibility for an attack, it often means there is no actual evidence for that person or groups’ involvement. If there was evidence, the headline would presumably run with that evidence — not the official’s statement. A good example of this was when the mainstream media ran stories stating John Kerry was certain of the Assad regime in Syria using chemical weapons. Yet no proof was actually offered, and if anything, the intelligence was fabricated.

If the Turkish authorities have proof that ISIS committed the attack, considering the group is obsessed with claiming all manner of attacks against their enemies, surely Erdogan could present it.

If not, what is really at play here?

What we do know is that the targets of the attack were supporters of a political party that threaten Erdogan’s dreams of totalitarianism. We also know ISIS has not claimed responsibility for the attack, nor has Erdogan provided any evidence they were responsible, except to reiterate their alleged responsibility over and over.

Don’t be surprised, therefore, if this attack is used as a further excuse to expand military operations against ISIS or some other group that Erdogan considers terrorists — or as a further move to target the Kurdish movement in Turkey and Syria. Oh wait, that literally just happened.

1 thought on “Did Turkish President Erdogan Just Use a False Flag to Justify Invading Syria?”