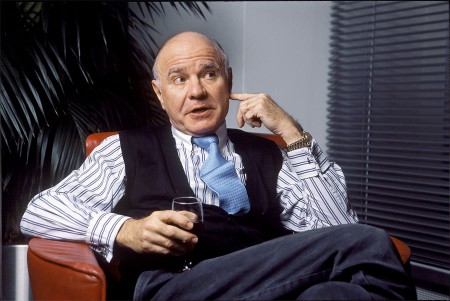 – Marc Faber Rings the Alarm Bell, Predicts a 50% Near Term Correction in Stocks:

Volatility is the name of the game. Stocks are acting up, but standing strong. Oil is propelling higher and the US dollar is falling. Turmoil around the world has never been higher and an ominous shadow is lurking in the background, ready to strike.

The situation that we now face is ultimately going to end in a collapse of epic proportion. The financial world is now a ticking bomb that is just waiting to explode – I know this, you know this and even if the masses don’t, they can feel it in their bones.

The only ones that don’t seem to be aware of this dangerous situation are the elites who are currently profiting off of this heightened turmoil and their mainstream media mouthpieces who couldn’t be more happy to assist in the destruction of the Western financial world. After all, it would make for a good story, right?

Unfortunately, I am not alone in this assessment of the current global situation. Marc Faber, a prominent voice in the financial community and the editor of the Gloom, Boom and Doom report has taken an ultra bearish view of the current economy.

A recent CNBC article, highlights a recent interview they had with Marc Faber this past week, and states the following:

The notoriously bearish Marc Faber is doubling down on his dire market view.

The editor and publisher of the Gloom, Boom & Doom Report said Monday on CNBC’s “Trading Nation” that stocks are likely to endure a gut-wrenching drop that would rival the greatest crashes in stock market history.

“I think we can easily give back five years of capital gains, which would take the market down to around 1,100,” Faber said, referring to a level 50 percent below Monday’s closing on the S&P 500.

The S&P 500 is sitting at 2,184.29 at the time of writing! This would be a truly stunning collapse of the markets. One that would send the financial world plummeting out of control. Contagion would spread and the credit markets would utterly and completely seize up.

What is equally as shocking as this claim of monumental collapse is the fact that Marc Faber believes this will happen in the near term future! This isn’t some far fetched 5-10 year prediction that no one will remember he made down the road. No, this is a bold statement from a man who accurately predicted the 2008 crisis and many of the drastic events that have unfolded in modern times.

Marc Faber is just one more expert that is ringing the alarm bells. Sadly, the mainstream media continue to dismiss the experts who are trying to warn the masses, stating that we are conspiracy theorist and nothing more. Even though we have been proven right in our predictions time and time again, causing the trash can to nearly overflow with tin foil hats.

I don’t know if the collapse is in the near term such as Marc Faber believes, but I know that it could occur at anytime. Whether it be a week, a month, or years from now, wouldn’t you rather be prepared? The risk is simply too great to not be.