The U.S. “regime change” operation in Syria recently tallied up some major successes.

The Syrian Democratic Force, a U.S. sponsored group of mostly Syrian Kurds, is besieging the Islamic State held eastern city of Manbij. According to the UN’s Human Rights commissioner 70,000 civilians in Manbij are cut off from all supplies. We have yet to hear calls for an immediate breaking of the siege or for enforced air drops of supplies to these people. Where are all the R2P fans in the Obama administration and all the well paid Syrian opposition propaganda groups on this? That the U.S. has managed to avoid any questions about this siege is surely a success.

Instead of delivering food the U.S. did some different air drops on Marjib:

At least 56 civilians were killed on Tuesday in air strikes north of the besieged Islamic State-held city of Manbij in northern Syria, and residents said they believed the attack was carried out by U.S.-led warplanes, a monitoring group said.The Britain-based Syrian Observatory for Human Rights said the dead included 11 children, and that dozens more people were wounded.

The CIA finances a long of proxy groups in Syria to fight the Syrian government and the millions of people its protects. It has delivered high powered TOW anti-tank weapons to many of these groups:

According to the BBC Foreign News producer Riam Dalati it is a group of these Nour al-Din al-Zenki “moderate rebels” who yesterday captured a Palestinian boy of some 10, maybe 12 years, taunted him and accused him of fighting on the Syrian government’s side. The boy had no uniform on and had medical infusion tubes in his right arm. 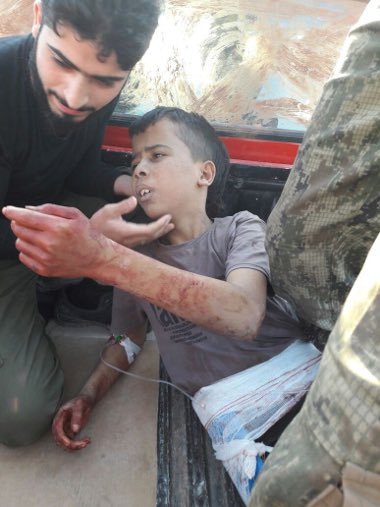 The CIA supported “moderate rebels” then behead the boy with a knife right on the back of that red pickup truck. There arephotos and videos of the child alive as well as videos of the beheading.

This shows again that the Obama administration has done nothing, or at least not enough, to help these democratic forces in Syria. If these moderate people would have received more weapons, they could have used something better than a rusty knife to slaughter the boy.

The Obama administration has done its best to shield not only the above “moderates but also al-Qaeda in Syria, aka Jabhat al Nusra, from attacks by the Syrian and Russian forces. U.S. supported “moderate rebels”, like the friendly folks above, mixed with al-Qaeda fighters and the U.S. insisted that thereby both are under its ceasefire agreement with Russian forces. Obviously the U.S. has long considered al-Qaeda in Syria to be some local problem that could be used to further “regime change” but would never become a danger for the U.S. itself or its interests. The Russians kept insisting that the group is to strike and rejected new disguised U.S. attempts to shield it.

Something happened though that suddenly let the Obama administration -here Secretary of State Kerry- change tact:

“The fact is that Nusrah is plotting against countries in the world. What happened in Nice last night could just as well have come from Nusrah or wherever it came from as any other entity, because that’s what they do.”

The fact that the Nice attack followed a script published in an al-Qaeda pamphlet might have helped to finally stop the nefarious schemes of those administration circles who nurtured the group. But again this only happened after some messy incident. Not once has the administration refrained from supporting the most brutal radicals, in Afghanistan, in Libya ,in Syria and elsewhere, until these came back to bite. It seems to have taken a “success” of 80+ killed people in Nice to move the U.S. away from supporting al-Qaeda.

Without al-Qaeda’s ruthless fighters the CIA supported  “moderate rebels” have no chance to win the war against the Syrian government. The U.S. is starting to follow the Russian script and will attack al-Qaeda and other like groups in Syria. The “regime change by force” project is thereby, for now, practically dead. Turkey is moving away from its nefarious role in Syria and is making friends again with the Syrian allies Russia and Iran. This will give additional impetus to the administration’s silent retreat from its “regime change” project.