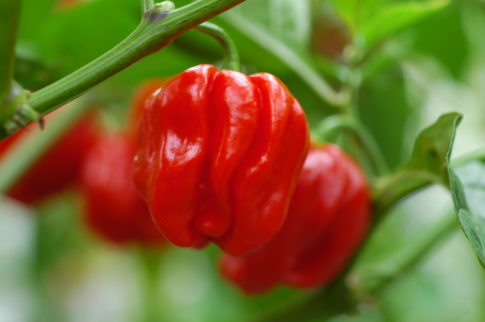 Scientists Find That Capsaicin Could Stop A Heart Attack In Progress (More related info down below.) 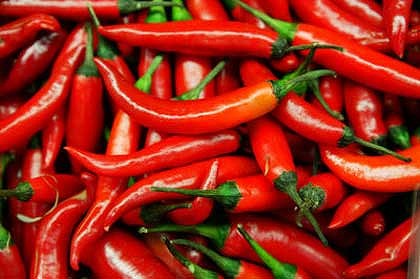 There are a number of peppers in cultivation that are known as chili peppers (Capsicum frutescens), but the term usually refers to the cayenne pepper, Capsicum annuum (see also our Cayenne article). Cayenne is a fairly hot pepper. This is due to its high levels of capsaicin, the substance that provides the spiciness and is also responsible for most of the pepper’s health benefits. Chilies are graded on the Scoville Scale, which measures the amount of heat producing chemicals they contain. Capsaicin is the main heat producing chemical in chilies. Other herbs contain different heat producing chemicals that can also be measured on the Scoville Scale, such as Gingerol which is found in Ginger Root.

Chili peppers are often associated with Mexican and Spanish cuisine, but they have been cultivated for culinary purposes virtually worldwide. However, it’s not just their uses in food that have made them so popular. Chilli peppers have also been used medicinally for thousands of years, particularly throughout Asia.

One of the most impressive properties of chili peppers is in their antihemorrhagic abilities. When taken in large doses, around one to two teaspoons powdered, they’re capable of bringing even significant bleeding to a screeching halt within a few minutes. In fact, chili peppers work so well for this purpose that, in some parts of the world, they are used in emergency situations.

Chili peppers are an excellent supplement for cardiovascular support. Although they are able to halt bleeding, they also cause dramatic improvements in blood circulation and blood pressure. Although the topic is, unfortunately, controversial, these amazing peppers are also capable of stopping a heart attack within seconds. Besides its ability to improve circulation, it also increases the heart’s activity, seemingly lending it strength, power and energy. Scientists aren’t certain precisely how it does this, but one theory is that it improves the distribution of nutrients, hormones and other factors throughout the body.

Another surprising fact of chili peppers is their ability to help control pain. They do this by boosting blood circulation, which helps to deliver healing nutrients to any injuries. In addition, these peppers also fight inflammation. Because swelling is a major factor in many types of pain, particularly that of the joints, this is a valuable asset. A steady supplementation of chili peppers helps you avoid reliance on the non-steroidal anti-inflammatory drugs (NSAIDs) that are infamous for causing stomach ulcers, damage to the liver and kidneys and even some types of cancer. Furthermore, taking chilli peppers for pain can even help you avoid potentially dangerous and addictive opiate painkillers.

Chili peppers are an excellent digestive aid, helping your stomach to process food more efficiently and thoroughly and decreasing the incidence of acid reflux. They do this by stimulating the secretion of stomach acid and other digestive fluids. Furthermore, while it seems counterintuitive, chili peppers have been found to be effective for preventing and healing peptic ulcers.

Current statistics from the American Heart Association indicate that nearly 150 million American adults are either overweight or obese, along with roughly a third of all children. While simple diet changes and the introduction of moderate exercise can offer some benefit, numerous studies have confirmed that chili peppers can offer significant assistance. In many poorer areas of the world, hot peppers have been widely used in the traditional cuisine because they cause you to feel full faster.

This is invaluable when you can’t afford to eat a lot of food. It’s also very helpful when you want to control your appetite for weight loss purposes, since overeating is the main cause of obesity. However, chili peppers aid weight loss in another way. They’re thermogenic, meaning that they ramp up your body temperature slightly, but still enough to cause it to burn a lot of extra calories. This process occurs even when you’re at rest, helping you to lose weight without putting in the extra effort. This is great news for overweight people who love spicy food.

Modern Western medicine is only now catching up to what traditional Eastern medicine has known for millennia: chili peppers are a powerful treatment and preventative for cancer. One way they do this is by inhibiting inflammation, which is suspected to be a major cause of cancer. Numerous experiments have also found that capsaicin, the active constituent in these peppers, suppresses the growth of tumors and even causes malignant cells to commit suicide. It has been shown to be particularly effective against androgen-dependent tumors of the prostate and testicles, as well as many other forms of hormone-dependent cancers.

Chili peppers are most often consumed raw, or cooked, as a food source. They can also be dried into a powdered form. This powder can be added to food as a spice or taken as a supplement in capsule form. Cayenne can also be found as a liquid tincture supplement.

Cayenne peppers, also known as Paprika, are often used as a natural fat burner and pain killer with anti-inflammatory properties.

Soothes effects of rheumatism and arthritis

Cayenne may be used internally or externally to treat arthritis, bunions, psoriasis, and muscle and joint pain.

Used externally, cayenne liniment may soothe the stiffness and pain of rheumatism and arthritis. The contents of a capsule, or half a teaspoon from a jar of cayenne powder, can simply be added to some moisturiser and then massaged onto the skin. Cayenne can be made into plasters or liniment or the tincture may be applied directly, to increase blood flow to areas afflicted with rheumatism, arthritis, pleuritis or pericarditis.

Cayenne can also be taken internally both as capsules and also fresh or dried powder added to food. It can be taken as an infusion for stomach and bowel pains or cramps. Small quantities of the fresh fruit or the powder may stimulate appetite and expel worms.

Cayenne contains: Alkaloids, capsaicin, capsacutin, capsaicin, capsanthine, capsico PABA, fatty acids, flavonoids, sugars, carotene, volatile oil, and vitamins A, B1, B2, B3, B5, B6, B9, and C.