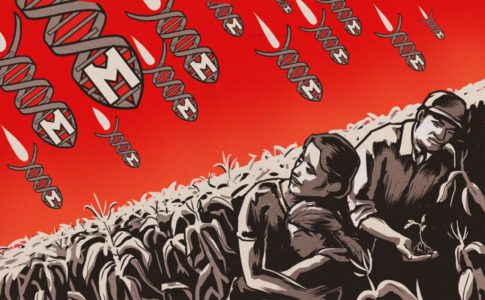 A federal judge has refused to dismiss a lawsuit by a former coffee grower who claims that Monsanto’s Roundup herbicide gave her cancer.

In another blow to Monsanto Co’s already tarnished public image, a former Kona coffee grower will be allowed to sue the biotechnology giant for possibly contributing to her cancer diagnosis. Monsanto’s Roundup herbicide has been subject to heavy scrutiny following studies linking the herbicide to non-Hodgkin lymphoma.

From 1996 through 2004, the Sheppards sprayed their farm with Roundup. In 2003, Christine Sheppard was diagnosed with non-Hodgkin lymphoma. “Why me?” she asked in a 2009 editorial for the newsletter of the Kona Coffee Farmer’s Association.

The Sheppards had never lived near any industry and were “turning organic,” living in Kona, where in spring flowers stick to coffee plants like snow on steep volcanic slopes above a cobalt sea. And the smoky smell of roasting “cherries” fills the air at harvest time.

Then Christine saw a report from Sweden that linked Roundup with non-Hodgkin lymphoma. “Was this my link?” she wrote. She bookmarked the report to read later, but found it had been removed from the web, “rumor says under pressure from chemical giants,” the Sheppards say in their complaint.

Monsanto filed a motion to dismiss the lawsuit, claiming that the editorial was proof that Christine suspected Roundup contributed to her cancer at least 7 years before filing the lawsuit on February 2, 2016. Monsanto said since the editorial was written in 2009 and Christine had not taken action the lawsuit was outside the two-year statute of limitations for tort claims.

U.S District Judge Michael Seabright disagreed with Monsanto and said that the editorial was “inappropriate” to consider. “It is not apparent on the face of the complaint that the statute of limitations has run, especially considering the allegations regarding the 2015 designation [of Roundup as a probable carcinogen] by the WHO (World Health Organization),” wrote Seabright.

The Sheppards are claiming Roundup is “misbranded” in violation of the Federal Insecticide, Fungicide, and Rodenticide Act, or FIFRA.

Judge Seabright’s reference to the WHO is based on two studies from the the WHO’s own International Agency for Research on Cancer (IARC). In March 2015 the IARC published a report which found that glyphosate “probably” contributes to non-Hodgkin lymphoma in humans and classified it as a ‘Group 2A’ carcinogen. Aaron Blair, a scientist emeritus at the National Cancer Institute and lead author of the study, told Reuters, “There was sufficient evidence in animals, limited evidence in humans and strong supporting evidence showing DNA mutations and damaged chromosomes.”

The IARC report was published in The Lancet Oncology detailing evaluations of organophosphate pesticides and herbicides. The report concluded that there was “limited evidence of carcinogenicity in humans for non-Hodgkin lymphoma.” The evidence for this conclusion was pulled from studies of exposure to the chemical in the US, Canada and Sweden published since 2001.

The researchers found “convincing evidence that glyphosate can also cause cancer in laboratory animals.” The report points out that the United States Environmental Protection Agency (US EPA) had originally classified glyphosate as possibly carcinogenic to humans in 1985. The IARC Working Group evaluated the original EPA findings and more recent reports before concluding “there is sufficient evidence of carcinogenicity in experimental animals.”

Glyphosate is only one of Monsanto’s products that have been recently connected to cancer, however. In June 2015 the IARC also found that the weed killer 2,4-dichlorophenoxyacetic acid, known as 2,4-D,“possibly” causes cancer in humans.

Shortly after the IARC review, the European Food Safety Authority (EFSA), an independent agency funded by the European Union, shot back with their own study, claiming that glyphosate is “unlikely to pose a carcinogenic hazard to humans.”

The WHO studies were followed by research from experts with the United Nations’ Food and Agriculture Organization (FAO). The FAO released a statement claiming that glyphosate is “unlikely to pose a carcinogenic risk to humans” exposed to it through food. The WHO co-signed the statement with the FAO. The organizations also found that glyphosate is not likely to be genotoxic, destructive to cell’s genetic material, in humans.

“In view of the absence of carcinogenic potential in rodents at human-relevant doses and the absence of genotoxicity by the oral route in mammals, and considering the epidemiological evidence from occupational exposures, the meeting concluded that glyphosate is unlikely to pose a carcinogenic risk to humans from exposure through the diet,” the committee wrote.

If you are keeping score, that’s the FAO, WHO, EFSA, and UN stating that glyphosate does not pose a risk of cancer to humans, and the WHO’s IARC stating that it could be linked to cancer. All this confusion among agencies does not help the average consumer when it comes to safety and health. Who should we trust when our very lives are on the line? Government agencies that operate a revolving door with big pharma, big ag, and other industrial complexes? When corporate and state interests become so intertwined it becomes increasingly difficult to decipher fact from fiction, and lies from truth.