In a stark flashback to the catalytic event that ultimately brought down Bear Stearns in 2008, and subsequently unleashed the greatest financial crisis in history, last night we reported that Standard Life, has been forced to stop retail investors selling out of one of the UK’s largest property funds for at least 28 days after rapid cash outflows were sparked by fears over falling real estate values.

As we further noted, citing an analyst, “given the outflows the sector seems to be experiencing, this could well put downward pressure on commercial property prices,” said Laith Khalaf, senior analyst at Hargreaves Lansdown. “The risk is this creates a vicious circle, and prompts more investors to dump property, until such time as sentiment stabilises.”

As we concluded, whie Brexit is not a Humpty Dumpty event, where all the Fed’s horses and all the Fed’s men can’t glue the eggshell back together, it is an event that forces investors to wake up and prepare their portfolios for the very real systemic risks ahead. And, indeed, if Standard Life was the first domino, moments ago the second domino also tumbled when as Bloomberg reported that Aviva Investors Property Trust is as of this moment “frozen” citing “extraordinary” market conditions.

As the FT adds, Aviva Investments said it had prevented retail investors from selling out of its £1.8bn UK Property Trust since Monday afternoon.

What is notable is that the drop in the fund is not even that bad: as such it merely shows what happens when everyone decides to pull their money out at once from a financial system built on ponzi assumptions, and how one should always panic first. 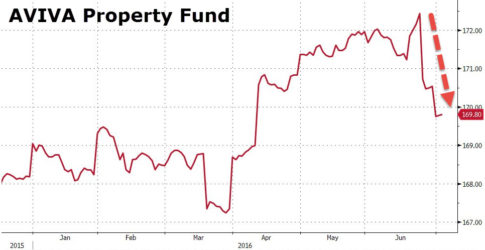 Cited by Bloomberg, Aviva said in an email that “market circumstances, which are impacting the wider industry, have resulted in a lack of immediate liquidity” adding that “we have acted to safeguard the interests of all our investors by suspending dealing in the fund with immediate effect…. Suspension of dealing will give Aviva Investors greater control in managing cash flows and conducting orderly asset sales in order to meet our obligations to investors.”

As Laith Khalaf, a senior analyst at Hargreaves Lansdown cited above, put it, “the dominoes are starting to fall in the U.K. commercial property market, as yet another fund locks its doors on the back of outflows precipitated by the Brexit vote. It’s probably only a matter of time before we see other funds follow suit.”

We could not have said it better ourselves.

“Standard Life’s decision to close its fund to redemptions concerns us. There is clearly fear that prices tomorrow will be substantially lower than prices today,” said Robert Duncan, analyst at Numis Securities. “Clearly the pace of redemptions has taken the fund by surprise.” 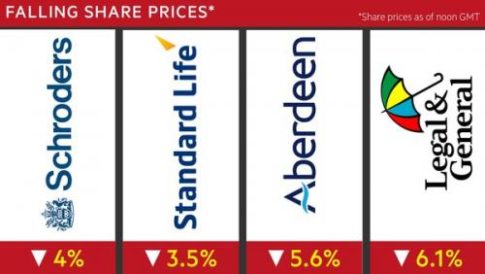 Funds considered most vulnerable are those that are open to retail investors — who can demand their money back at short notice — and held lower levels of liquid holdings, such as cash or real estate shares, over the referendum period. Standard Life’s fund held 13 per cent at the end of May.

Open-ended property funds own about 5 per cent of the UK commercial property market, up from 2 per cent in 2007 ahead of the financial crisis, Mr Prew said, potentially increasing their impact on the broader market. Unlike closed-ended funds, which have a defined size, open-ended funds can issue an almost unlimited number of shares and grow or shrink as investors commit funds or withdraw them.

In another sign of stress, listed real estate investment trusts are trading at an average discount of 32 per cent to the net value of their assets, according to Jefferies.

Consider this a rerun of the open-ended US bond fund scare from late 2015, which saw numerous bond funds gating as well as the liquidation of several prominent names. It remains to be seen how extensive the fallout in the UK will be now that the first two dominos have toppled, forcing those who need immediate liquidity to approach those funds who stil have not gated.