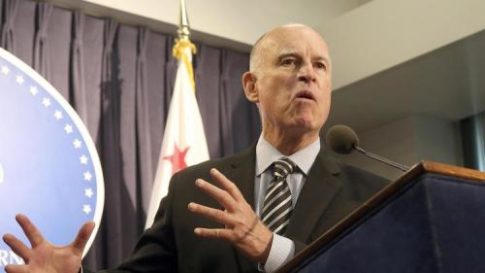 Gov. Jerry Brown speaks at an event in Los Angeles

Just three months after signing a $15/hour minimum wage into law, a proposal which as he himself admitted “doesn’t make economic sense” and which unleashed an exodus of locals departing for other states, on Friday afternoon,  California governor Jerry Brown once again pandered to liberals (while ironically angering some democrats in the legislature)  when he signed a sweeping package of gun control bills on Friday, banning high-capacity ammunition magazines and expanding the definition of prohibited assault weapons in the wake of mass shootings in San Bernardino and Orlando.

The legislation in Sacramento was passed with overwhelming Democratic support, and was largely opposed by Republicans who make up a small minority in the Senate and the Assembly.

Democrats in the legislature rushed the measures through in hopes of passing them before their summer break, in part to try to forestall a competing gun control proposal headed for the November ballot. California already has some of the toughest gun control laws in the nation, but after the shooting spree in the Southern California city of San Bernardino last December, lawmakers began work on measures they said would close unintended loopholes.

“My goal in signing these bills is to enhance public safety by tightening our existing laws in a responsible and focused manner, while protecting the rights of law-abiding gun owners,” Brown said in a signing measure. As Reuters writes, “it was a rare success for advocates of greater gun control.”

The new laws would prohibit the possession of high-capacity magazines — those holding more than 10 rounds of ammunition — for assault weapons. “These so-called high-capacity magazines are not for target shooting or hunting,” said Senator Loni Hancock, a Democrat who sponsored the bill. “Their sole purpose is to kill as many people as possible in the shortest period of time.” A separate bill banned semiautomatic weapons with “bullet buttons,” which make it easy to quickly remove a magazine and replace it with another.

As the LA Times reports, the governor’s action comes one day after the Legislature approved 12 gun-control bills that were introduced in response to the December mass shooting in San Bernardino. The bills gained legislative momentum after last month’s massacre in Orlando that claimed 49 lives.

While Brown signed six measures, he also vetoed five several proposals which he described as “overly regulative”, including a bill that would have allowed co-workers, mental health workers and school officials to petition the court for a “gun violence restraining order” for people judged a danger to themselves and others. Such orders would allow guns to be confiscated for a year.

Other bills vetoed by the governor would have:

Despite the vetoes, the National Rifle Association accused the governor of exploiting the terrorist attacks for political gain.

“Gov. Jerry Brown today signed a Draconian gun control package that turns California’s law-abiding gun owners into second-class citizens,” said  Amy Hunter, California spokesperson for the group. “ The governor and legislature exploited a terrorist attack to push these measures through even though the state’s already restrictive laws did nothing to stop the attack in San Bernadino.” “This makes California the most anti-gun state in America,” Hunter added.

“The California Legislature showed their true faces today,” said Craig DeLuz, spokesman for the Firearms Policy Coalition. “They abused the legislative process to enact their depraved anti-civil rights agenda.” Their efforts spilled into intra-party politics as well, after Lieutenant Governor Gavin Newsom, who is expected to run for governor in 2018, gathered enough signatures to place his own gun control referendum on the November ballot.

Ironically, the move angered the state Senate’s top Democrat, Kevin de Leon, who had been working to pass many of the same measures through the legislature. Worried in part that Newsom’s initiative would boost turnout in November among Republicans who oppose gun control, legislative Democrats rushed to pass their bills in time for Newsom to withdraw his measure.

But the lieutenant governor refused. “Today’s steps in the right direction will grow into a giant leap forward for public safety if voters pass the Safety for All initiative to keep guns and ammo out of the wrong hands,” he said.

Brown acted on the gun bills just before he left for a European vacation expected to last a few weeks.

The Second Amendment is not about “target shooting or hunting”: