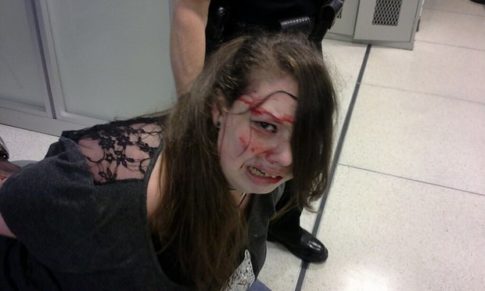 A brain tumor had left Hannah blind in one eye, deaf in one ear and partially paralyzed, so when the guards grabbed each of her arms it startled her, she said.

Hannah Cohen, 18, was on her way home from St Jude’s Hospital when a scanner went off and led to incident that left her ‘physically and emotionally’ injured

A disabled teenage cancer patient was injured during a violent arrest by security agents at Memphis international airport, her family has alleged in a lawsuit filed against the Transport Security Administration.

Hannah Cohen, 18, at the time of her arrest on 30 June 2015, and her mother had been on their way home to Chattanooga from St Jude’s hospital in Memphis, where Hannah underwent her final treatment for a brain tumor.

Hannah and her mother, Shirley, told the Guardian that the pair had made the trip hundreds of times, and knew the airport security routine well. Shirley would usually go through the scanner first and wait for Hannah on the other side, since Hannah’s tumor, and numerous surgeries and treatments since she was two years old, had left her easily confused and frightened in unfamiliar situations.

According to the complaint, the warning alarm was triggered when Hannah passed through the body scanners. Hannah attributed the alarm to her shirt’s design.

“My shirt – it had sequins,” Hannah told the Guardian, laboring to speak. According to the complaint:

“You could see on the screen what it was pointing out,” Shirley said. She stood to the side, watching, wearing an immobilization boot on a broken foot.

Agents told Hannah they needed to take her to a “sterile area” where they could search her further. She was afraid, Shirley said, and offered to take off the sequined shirt as she was wearing another underneath, but a female agent laughed at her.

Seeing the scene begin to unfold, Shirley hobbled to a supervisor standing nearby. “She is a St Jude’s patient, and she can get confused,” she said. “Please be gentle. If I could just help her, it will make things easier.”

But soon, a voice on the public address system requested more agents to report to the checkpoint, Shirley said. “That’s when the armed guards came.”

The guards slammed Hannah to the ground, her mother said, smashing her face into the floor, which the complaint alleges left her “physically and emotionally” injured.

Shirley had just picked up her phone from the conveyor belt, and she snapped a photo of Hannah on the floor: handcuffed, weeping and bleeding.

“Another guard pushed me back 20ft, in my boot, and told me I couldn’t be nearby,” said Shirley, a professor of nursing at a university in Chattanooga.

“I felt so helpless. I sat down on a bench facing away so I couldn’t see what they were doing to my daughter.”

The lawsuit alleges that the TSA did not give Hannah adequate accommodation to screen her, and discriminated against her because of her disability. It names the TSA and the Memphis-Shelby County airport authority and seeks damages that include medical expenses and for personal injury, both physical and emotional. It calls for a “reasonable sum not exceeding $100,000 and costs”, and an undisclosed punitive amount.

The TSA has not yet responded to the complaint.

Hannah disappeared behind a door, then went to a hospital, and finally to the Shelby County jail. After 24 hours apart, the mother and daughter were reunited in the parking lot of the jail.

The next morning – now two days without their belongings, which had made the flight home – the pair appeared before a local judge, who asked the accused to explain herself.

When Hannah responded, the judge said: “You’re going to have to speak up.”

That’s when Hannah looked up and her hair fell back from her face, revealing her unseeing eye, surrounded by cuts and contusions.

“The judge’s eyes got big and round,” Shirley said.

After inquiring if the pair were from Memphis, the judge recommended they get legal representation.

The charges were all dropped two days later, and the court refunded the $250 in costs the family had paid.

The TSA did not immediately return a request for comment. But a TSA spokeswoman, Sari Koshetz, said in a statement that “passengers can call ahead of time to learn more about the screening process for their particular needs or medical situation”.

“Why should I do that when we’ve been going through that airport for 17 years?” Shirley said.

“These people think they are God. They think they can do anything they want,” she said. “Well, in this country we have the Americans with Disabilities Act. And if they will do this to a disabled girl, does that mean they’ll do it to an 80-year-old grandmother? It’s time for justice.”