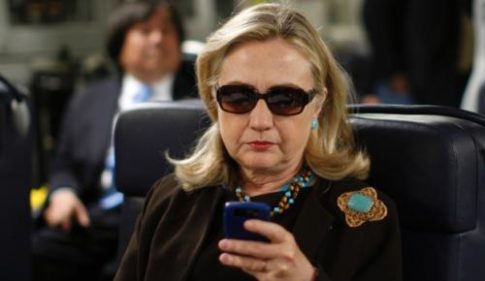 Having previously said she would not be voluntarily subjugated to an interview by the FBI in the agency’s probe surrounding Hillary Clinton’s email server, moments ago NBC reported that the Democratic presidential candidate, seemingly shaken by last week’s events when a meeting between her husband and the US Attorney General Loretta Lynch has sparked a scandal suggesting there is backdoor collusion between the Clintons and the DOJ and that, as Judicial Watch put it, the “fix is in“, has given a “voluntary” three and a half hour interview to the FBI over the use of her private email server.

As NBC reports, “presumptive Democratic nominee Hillary Clinton was questioned by the FBI in a long-awaited interview Saturday over the use of her private email server, an aide said. The interview’s purpose was to delve into whether Clinton mishandled classified information submitted on her private email system while she served as secretary of state. Her top staffers have already given testimony.”

The interview happened at the FBI headquarters in Washington, D.C. It lasted approximately three and a half hours.

“Secretary Clinton gave a voluntary interview this morning about her email arrangements while she was Secretary. She is pleased to have had the opportunity to assist the Department of Justice in bringing this review to a conclusion. Out of respect for the investigative process, she will not comment further on her interview,” Nick Merrill, a Clinton spokesman, said in a statement.

As NBC adds, the fact that the interview was “voluntary”, means there was no subpoena. It is unclear if Hillary had been sworn in.

Use of word “voluntarily” in the context of @HillaryClinton FBI interview means there was no subpoena.

The interview also means that the investigation  is coming to an end and that a charging decision will soon be made (or not).

Eight officials from the F.B.I. and the Department of Justice conducted the interview, according to a person who was familiar with the substance of the session but who declined to be named because the meeting was private. This person characterized the meeting as “civil” and “businesslike.” Neither the campaign nor the F.B.I. would elaborate on it.

As some have suggested, the rapidly escalating scandal from the meeting between Lynch and Bill Clinton which even David Axelrod admitted was “bad optics”, may have pushed the DOJ to actually do its job, and to accelerate the FBI’s probe. As to whether Hillary will ever be indicted, we are not holding our breath.