Following the resignation of more than 20 members of his shadow cabinet, UK Labour Party Leader Jeremy Corbyn has just lost a vote of no confidence by a vote of 176 to 40. Despite his previous statement that he is “not going anywhere” we suspect this will lead to a formal leadership challenge. Notably Cable is weakening on the news as yet another level of uncertainty hits The UK.

Jeremy Corbyn has lost a no-confidence vote among Labour MPs.

The party’s parliamentarians voted 176 to 40 against Mr Corbyn’s leadership in a secret ballot on Tuesday afternoon.

The motion was formally proposed at a meeting of the Parliamentary Labour Party on Monday evening.

Which has sent cable modestly lower, with sterling dipping back under 1.33 at last check. 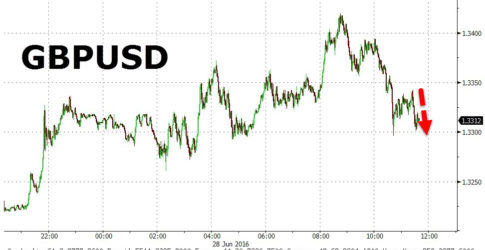 The vote is non-binding and so far Corbyn has indicated he won’t step down as head of the main opposition party.