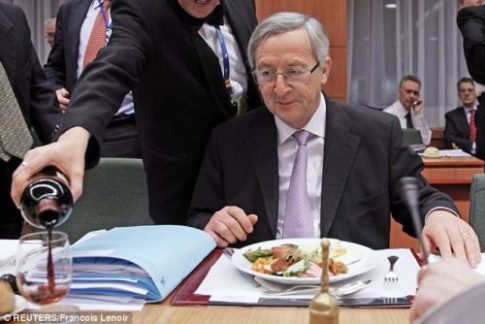 – Juncker Refuses To Speak English In Address To EU Parliament:

While both Angela Merkel and David Cameron, and perhaps Boris Johnson, have been doing all they can to restore some of the badly burned bridges between the UK and Europe over the past week, the European Commission president, Jean-Claude Juncker, perhaps once again under the influence, is seemingly engaged in a one-man crusade to accelerate and crush any last hope of an amicable UK departure with lingering ties to Europe.

As we reported earlier, Juncker pulled a fast one on the EU parliament when he first said that “we must respect British democracy and the way it has expressed its view,” a statement that was greeted by rare applause from the UKIP members present. However, Juncker promptly turned the tables when he said “that’s the last time you are applauding here… and to some extent I’m really surprised you are here. You are fighting for the exit. The British people voted in favor of the exit. Why are you here?” Juncker continued, breaking from his speech text.

Then, according to a Telegraph correspondent, Juncker added that he has imposed a Presidential Ban on all contact between EU officials and UK officials until Art 50.

But the coup de grace, to use the proper language, came when as AP reported, Juncker decided to refuse speaking in English altogether. In contrast to recent speeches on Britain’s future in the European Union, European Commission President Jean-Claude Juncker didn’t speak English Tuesday as he lamented the U.K.’s departure from the bloc.

Juncker’s official speech to EU lawmakers was made only in French and German. He did, however, respond to hecklers among the British EU lawmakers in English.

Previously, Juncker has often used the EU’s most widely spoken and written language as well, particularly when addressing issues close to British hearts.

It’s unclear whether the move was a political message from one of Europe’s longest serving leaders, or an act of caution due to criticism he has received for making mistakes in English in the past.

Whatever the motivation, it almost appears that Juncker is doing everything in his power to sabotage any lingering hope of some last minute mending of relations between the EU and the UK.

Meanwhile, the fate of the UK aside, the blowback inside Europe is growing and now the prime ministers of four central European countries say the European Union needs to be reformed to renew the trust of citizens in its institutions. The prime ministers of the Czech Republic, Hungary, Poland and Slovakia also said the forthcoming exit negotiations between the EU and Britain must not leave EU members and their businesses in a worse position than Britain and its companies.

They said the EU should focus on economic growth, an increase of prosperity and the development of a common security policy. The four countries form an informal bloc known as the Visegrad Group and released a joint statement ahead of a summit of EU leaders in Brussels Tuesday.

What was left unsaid is that the balance of power has now shifted dramatically, and what was once Merkel’s sole domain now sees the periphery as gradually dominating all negotiations thanks to the impromtpy threat of a referendum that any one nation may invoke at a moment’s notice. In the aftermath of Brexit, this is a threat that Merkel and Brussels have no choice but to do everything in their power to remedy, even if it means succumbing to every single demand.