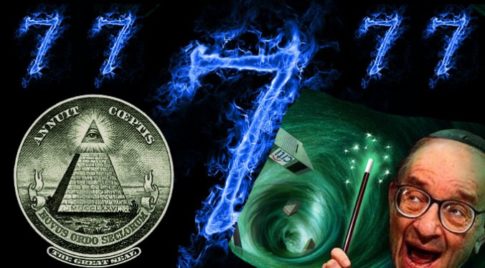 – The Brexit Psyop: Greenspan Falsely Blames the Brits for the Crash and Chaos to Follow:

This Jubilee Year is advancing just as I have predicted, with all the major elements of a worldwide catastrophe now in place.

On Monday, the markets continued to collapse, with every major European stock market down 2-3% and the Dow currently down 300 points following Black Friday which, we now know, was the worst sell-off in worldwide stock markets in history, losing a combined $2 trillion.

The previous largest sell-off in history occurred 7 years, 7 months, 7 weeks and 7 days prior, on the Shemitah end day of September 29, 2008, when $1.9 trillion was erased in one day.

Of course, if you are a TDV reader, or especially a subscriber, you knew this was all going to occur this Jubilee Year.

And, as we said, they’d look to blame it on anything but themselves.  It appears they have chosen Brexit to be the “reason” for this collapse.

Alan Greenspan just confirmed this to CNBC, blaming Brexit for every horrible thing that is about to happen, which makes perfect sense.

“This is the worst period I recall, since I’ve been in public service,” said Greenspan in the CNBC interview. “There’s nothing like it, including the crisis — remember October 19th, 1987, when the Dow went down by a record amount 23 percent? That I thought was the bottom of all potential problems. This has a corrosive effect that will not go away.”

Of course, Greenspan moderated his tone as well. Stagnation, he indicated, was probably the biggest challenge as regards the aftermath of Brexit. But what stagnation means, no doubt, is the awful period of “stagflation” in the 1970s when the market whipsawed and inflation could double the price of real-estate in a few months.

The game is over. Blame it on Brexit! Greenspan was in full cry, of course. He knew just what to say. Britain’s leave-taking, he told CNBC, would enhance the tensions in Europe and further the antagonism between Germany and France. Greenspan even noted that France and Germany had gone to war with each other on several occasions!

The real problem he explained, was that real-income growth was slowing throughout the West, including the US. His explanation: a decline in productivity and a “huge contraction” involving capital investment.

This is such a Keynesian explanation, of course. Describe the results without mentioning the causes. Don’t mention the torrents of money that central banks have been printing. Don’t mention the impossible destruction of the derivatives markets – one you’ve made an impending reality. Don’t mention the true reasons for sovereign debt, which have to do with the availability of fiat money and the easy terms offered to any tinpot dictator or corrupt political leader who wanted to grab the money and run.

Oh, they know what’s coming. The fake prognostications are underway. The takedown of Europe has begun and the insiders are beginning to blame Brexit . Just As Planned.

In his interview, Greenspan even acts like he’s been putting thought into how the catastrophe can be averted. Predictably, ridiculously, he suggests entitlements ought to be cut. And that “protectionist sentiments” need to be combated. This is just a continuation of the psyop. Greenspan  and his paymasters now intend to provide us with a story-line that Brexit is responsible for the collapse of “free trade.” It’s part of a “growing tide” of protectionist sentiment, you see.

What he doesn’t tell you is that free trade exists up to and until a “free trade” agreement is signed. 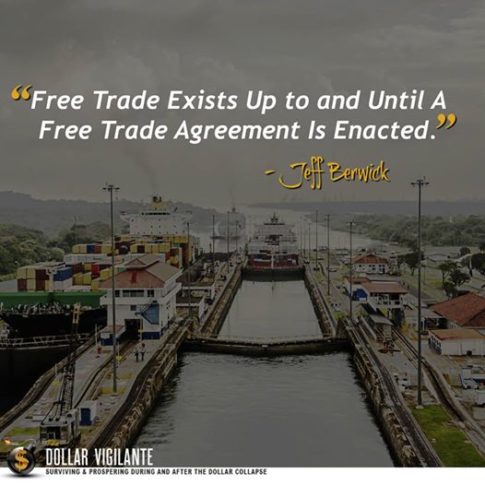 A true “free trade” agreement would never be longer than one sentence, “We agree citizens of these countries can trade freely without restraint, extortion or manipulation by the government.”

If we had a world with truly free trade we’d have a world of peace and prosperity like we’ve never known it.

But Greenspan and the rest of the Powers That Shouldn’t Be (PTSB) want the exact opposite, a world full of “free trade” agreements, like the Trans Pacific Partnership (TPP), with phone books full of regulations, tariffs, taxes and advantages for large multinational corporations.

Greenspan is one of the top spokesmen for the PTSB and they will make it look like the simple act of Britain wanting to have a small amount of sovereignty is why the world is falling apart.

It’s a ridiculous idea when you think about it.  All Brexit means is that the people in the geographic region known as Britain will have slightly, although not much, more control over the affairs in that area.  How could that possibly decimate the worldwide economy and markets?  It can’t.  But that’s what they want you to believe.

The reason couldn’t be the unpayable multi-trillion dollar sovereign debts faced by many countries that will cause them to collapse …or the communist style central banking system that enabled it and hollowed out every economy in the world… or the myriad of government rules, regulations and extortion (taxes) that have impoverished so many.. or the growing tension with the BRICS and the military stand offs in Ukraine and Syria that are soon to involve Russia and the US in significant escalations.

No, the problem is Brexit… they say.

Think of Brexit as a kind of race horse. They’ve fired the starting gun and Brexit is racing down the track toward the finish line. When Brexit crosses the finish line all hell will break loose. Of course, in the meantime it will be hellish too. But it’s going to get a lot worse.

Here at TDV, we’ve been covering the expanding, worldwide depression for more than a year, between our Shemitah coverage and our subsequent Jubilee narrative. No other website in the world can make the statement that it has tracked the unraveling of Western civilization from day-to-day, but if you’ve been reading TDV blogs, you know we have.

On June 24th, as soon as Brexit happened, we posted our analysis. You can see it HERE. One excerpt:

Jubilee 2016 is a time for putting in place the building blocks of chaos … Tonight, it appears as though a move away from a more centralized, global government. That’s a wonderful victory. But I don’t underestimate the forces of darkness.

And HERE we identified the face of those “forces” the very next day in our article, “The Magic Number 7: Brexit Collapse Falls Exactly on Shemitah Date.

In 2014, Christine Lagarde gave a speech on “the magic number 7.”  It, along with work by Jonathan Cahn, led us to the Shemitah seven-year cycle and the Jubilee year, which the globalist elites are well aware of.

What we’ve discovered since is that there is even more to the “magic number 7” than just years… it appears to correlate right down to months, weeks and days. The last major market crash occurred on September 29, 2008.  On that day, the Dow Jones fell 777 points, of all numbers…. its biggest one day point drop ever.

No one else is going to give you this kind of analysis. Partly that’s because no one else in the financial sector is studying the Shemitah and Jubilee literature and using the insights to help formulate investment strategies. It’s not a coincidence that our portfolio is up 130%+ percent in the last six months (and still rising today with gold and gold stocks again soaring), or that subscriptions have climbed by the thousands. Or that I predicted the rise of bitcoin from $450 to $750 this year (after I predicted the rise from $250 to $450 last year). No one else has our track record because no one else ever bothered to read the sacred scripts – or make the necessary connections between them and the globalist “elites”.

We use these blogs to explain what’s going on, but I also like to remind potential subscribers that it’s important to bolster your wealth and resources any way you can in these tumultuous times. One of the best ways you can do this is to subscribe to our TDV newsletter. You can see from these articles and others that our analysis is on the pulse of what’s taking place. We understand what’s going on and our brilliant Senior Analyst, Ed Bugos, acts on it every day.  He’s issuing another alert today (or tomorrow at latest), followed right after by our next issue when I’ll go into far more detail on what happens next.

Time is growing short. Events are turning even more critical if that’s possible. Join our growing brotherhood and all that comes with it… from our worldwide TDV groups that can offer you council and friendship, to our original books and back issues of the newsletter and timely alerts that can multiply your profits. Subscribe HERE.

Don’t listen to the brainwashing of the Keynesian media or the calculated misdirection of Alan Greenspan. Come explore the truth with us. That`s the most important thing we can do together.

2 thoughts on “The Brexit Psyop: Greenspan Falsely Blames the Brits for the Crash and Chaos to Follow”