The Obama administration’s pro-gun control stance has done nothing but make the gun culture stronger and cause firearms arms to fly off gun store shelves. As PlanetFreeWill’s Joseph Jankowski notes, under Obama, background checks for guns reached 141.4 million through the end of May, amounting to sales of about 52,600 a day, according to the FBI… And 2016 is on pace to surpass last year’s record.

In the wake of the Orlando shooting, we noted that guns were flying off the shelves at gun stores. While many believe that shootings drive up gun sales, Tom Engle, the owner of Hunter’s Warehouse (the online gun store which sold 30,000 AR-15s in just one week after Orlando) has another viewpoint on that topic.

Additionally, manufacturers have reported producing about 21,000 guns a day, or more than 46 million in Obama’s first six years in office.

“The recent surge in gun buying is based on two variables: fear of government intrusion on Second Amendment rights, and more importantly, people interested in personal protection. Our sales have doubled across the board, not just AR-style rifles, but also in small frame handguns and home defense shotguns. We saw this just after the San Bernardino shooting, as well. More and more people are coming to realize that their personal safety is at risk and their government cannot protect them.” said Justin Anderson, marketing director for Hyatt Guns in Charlotte, North Carolina, adding “This is likely the beginning of a long rise in gun sales leading up to the election. Should Hillary Clinton take a significant lead, it will only boost these sales.”

To see the magnitude of the increase in FBI firearm background checks, below is a chart that shows the month of May for each year dating back to 2008. 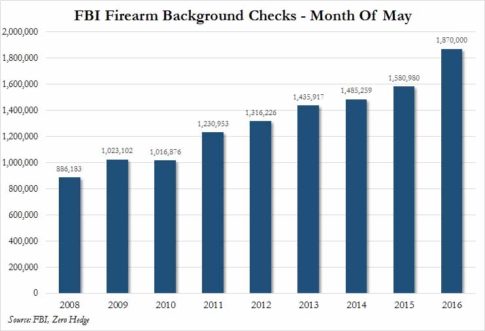 For those curious if a President can impact gun sales, this chart from 2000 to November 2015 offers a bit more of a historical context – spot two key events that have caused gun sales to spike.

After every call for more strict gun control measures, the establishment only fuels an increase in the exercise of the 2nd Amendment.

If Clinton wins the presidency, one may want to include RGR and SWHC in the portfolio. 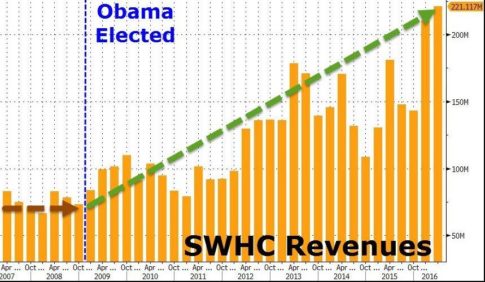